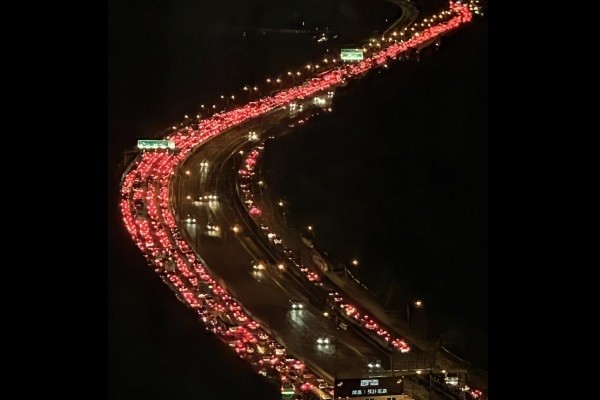 TAIPEI (Taiwan News) -- Photos began to surface online on Monday (Sept. 2) of Hong Kong activists being taken home by thousands of cars driven by volunteers after the MTR trains had been shut down and police deployed to try to block them from returning home from the airport.

On Sunday, Hong Kong protesters launched an "Airport Traffic Stress Test" overwhelming road and rail links to the airport, forcing many travelers to walk to the airport with their suitcases. That evening, police were dispatched in force and in an attempt to block their escape, MRT and bus lines were shut down.

However, about 5,000 private cars driven by volunteers arrived on the scene to help evacuate the protestors before they could be arrested, reported Liberty Times. The massive river of cars streaming out of the airport was described as the Hong Kong version of the "Dunkirk evacuation." At about 6 p.m., a large number of riot police were dispatched to the scene to clear it of protesters by force. The MRT also cooperated with police and closed several stations.

By 9 p.m., the Tung Chung Line was still closed and stations and wharves were swarming with riot police, according to the report. Thus, anyone trying to leave by bus or boat could be apprehended by police.

Faced with a blockade by land and sea, demonstrators had no choice but to try to make the 20-kilometer trek along the North Lantau Highway from the airport back to the city on foot. Fortunately, news spread of the protesters' plight on social media, and an estimated 5,000 vehicles were dispatched to rescue them.

Hong Kong democracy activist Joshua Wong (黃之鋒) post an image of the red tail lights thousands of cars slowly winding their way away from the airport and wrote, "Hong Kong people have no choice but to retreat."