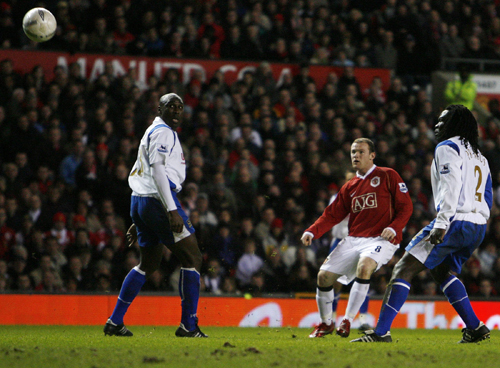 Wayne Rooney scored twice to fire Manchester United past Premiership rival Portsmouth at Old Trafford and into the fifth round of the FA Cup.
After ending a seven-game goal-drought at Arsenal last week, the England striker stepped off the bench to tap home from Ryan Giggs's cross with just 13 minutes remaining.
Rooney confirmed he is back to his very best six minutes later when he floated an exquisite chip over the head of Portsmouth keeper David James from more than 20 yards to put the tie beyond doubt.
Portsmouth rallied and an 87th minute reply from Kanu, who deflected a shot from teammate Pedro Mendes and gave the visitors hope of forcing a replay.
But United was not to be denied and there was no doubt the afternoon belonged to Rooney, whose stunning 30-minute display rescued his side and also prevented an angry post-match inquest into two decisions that denied the home side goals earlier in the match.
Serbian defender Nemanja Vidic was denied in the first half when his header was cleared by Mendes from behind the goal-line.
And until Rooney struck, it looked as though United would suffer from a double dose of bad luck when Henrik Larsson's superb second half volley was wrongly ruled out for offside after the Swede met Gary Neville's through ball with a perfectly timed run.
Despite those chances, United rarely dominated a game which Portsmouth always looked capable of taking to a replay at the very least.
While Rooney seems to be finding his groove, West Ham manager Alan Curbishley admitted his players are starting to panic as their season goes from bad to worse.
Curbishley's side crashed out of the FA Cup with a 1-0 defeat by Watford at Upton Park that raised questions about its ability to avoid relegation from the Premiership.
West Ham is currently third from last and will be destined for the drop if it reproduces many more displays as poor as the one that handed struggling Watford a place in the fifth round.
Anthony McNamee's 42nd minute overhead kick clinched the win for Watford and Curbishley conceded the presure of West Ham's predicament has started to affect his players.
"We are frustrated and only results can change that," Curbishley said.
"We are in a position now where if we go 1-0 up we start to panic and if we go 1-0 down we start to panic."
In other FA Cup fourth round action: Luton 0, Blackburn 4; Barnet 0, Plymouth 2; Birmingham 2, Reading 3; Blackpool 1, Norwich 1; Bristol City 2, Middlesbrough 2; Derby 1, Bristol Rovers 0; Crystal Palace 0, Preston 2; Ipswich 1, Swansea 0; Fulham 3, Stoke 0; Tottenham 3, Southend 1.