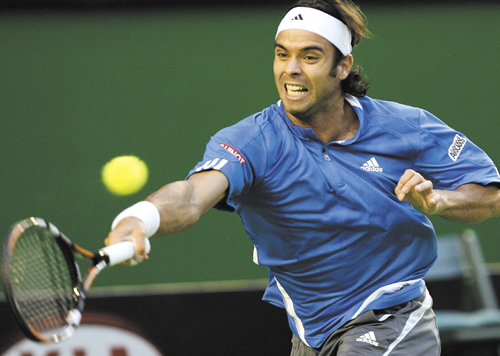 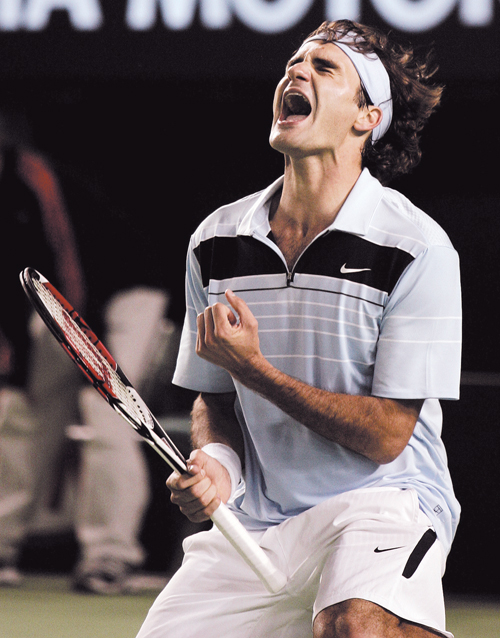 Roger Federer thought about changing up his game before he realized: Why mess with domination?
The result was his 10th Grand Slam singles title - four short of Pete Sampras' record - as he beat Fernando Gonzalez of Chile 7-6 (2), 6-4, 6-4 in yesterday's final and finished a perfect run through the Australian Open, winning 21 straight sets.
"If somebody would have told me I'd win 10 Grand Slams from mid '03 till today, I never would have thought there was any chance of doing something like that," Federer said.
He improved his winning streak to a career-best 36 matches, became the first man in the Open era to twice win three straight majors and has won six of the last seven Grand Slam titles, losing only to Rafael Nadal in last year's French Open final. It also was the first time that a champion went through a major without dropping a set since the 1980 French Open, when Bjorn Borg did it for the third time. Ken Rosewall, who was sitting in the stands, was the last man to do it at the Australian Open, in 1971.
By reaching the final, Federer already had tied Jack Crawford's record of playing in seven consecutive finals at the majors, set in 1934.
"Equaling records, doing something that hasn't been done for a long time, it's really nice, there's no doubt," Federer said. "All I care about in the end is to hopefully hold that trophy, even though it might be 20-18 in the fifth set.
"Of course, now that it's all over, it's great to think, 'Wow, you know, not having dropped a set.' It's quite amazing."
Federer said he pondered a different strategy against Gonzalez, then recalled their past history.
"In the end I said, you know what, I've beaten him nine times, so just take it easy and play your game, and hopefully it is going to work out," Federer said. "It did."
Gonzalez said the Swiss star was simply too good.
"I have to congratulate again - again - Roger," the 26-year-old Chilean said. "He's on the way to be maybe the best player ever. He makes tennis very simple. He is a great champion who played a really good match today, all week - almost all his life."
Next up is the French Open, the only major Federer hasn't won yet. "That's such a tough Grand Slam to win," he said. "I am improving year by year on clay and maybe one year (Nadal) won't be in the final, and if he is, maybe I can beat him."
Gonzalez, seeded 10th and into his first Grand Slam final, kept Federer under pressure with his big forehand, but could not quite match the all-around game of the player who has been ranked No. 1 for 156 consecutive weeks.
He was trying to run around his backhand to whip powerful forehands. Federer was trying to keep him from doing it, leading to a number of backhand-to-backhand rallies.
Gonzalez broke Federer in the ninth game, the first breakpoint chance of the match, and had two set points in the next game but failed to convert. His first serve at 40-15 was called wide. He didn't challenge despite his coach's urgings, and replays showed the ball was good.
"I was missing too many forehands, I didn't know what to do exactly with his slice," Federer said. "Maybe the wind, maybe his court coverage and everything put me under pressure, and I wasn't feeling that great right from the start.
"If he closes out 6-4, he is clearly the better player in that set. I came back just at the right moment."
Federer broke back to level at 5-5 and then had four set points in the next game before Gonzalez held in a game that went to deuce seven times. Federer dominated the tiebreaker, jumping out to a 5-0 lead after winning a challenge against an incorrect baseline call and getting the first point replayed.
Gonzalez conceded only two points on serve in the second set until Federer broke for a 4-3 lead.
Federer fired an ace to close the second set and broke Gonzalez in the seventh game of the third. He earned triple championship point with a forehand winner and closed it with a backhand down the line.
He fell to his back, rolled over and then got up, hit a ball into the stands and took a bow. He had lost only 17 points in 16 service games plus the tiebreaker, and dropped only two points on serve in the last set.