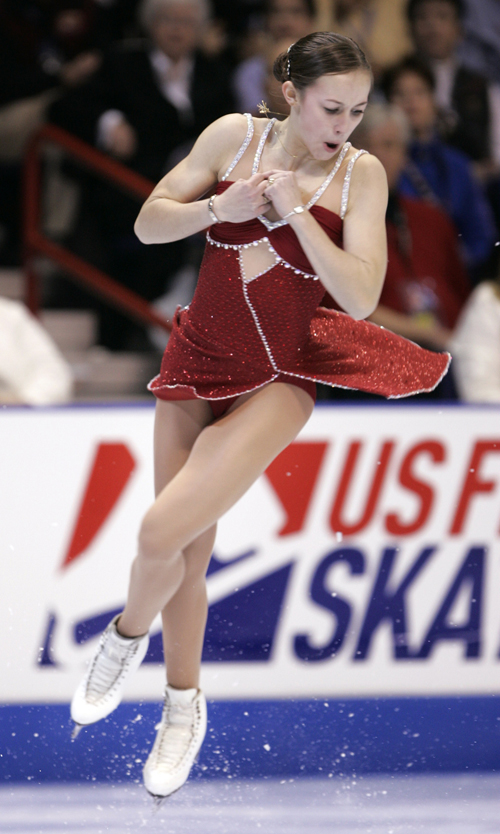 Evan Lysacek had no way to know he'd need the skate of his life to win his first men's U.S. Figure Skating Championship, but he went out and did it, anyway.
Leaving nothing to chance, Lysacek, 21, who skated just before his primary rival, Johnny Weir, brought a Spokane Arena crowd of more than 9,000 to its feet - and kept it there - with a stunning free skate to wrap up the crown.
Skating to "Carmen Suite," Lysacek began his program with what for U.S men's skating, qualifies as a nuclear bang: A quadruple jump - the first he had ever landed in competition.
With that ace in the hole, he skated a clean, confident program, earning a whopping 169.89 in the free skate, 248.88 for the competition. He finished amid bedlam, collapsing to his knees at center ice, as if stunned with his own performance.
Weir, the three-time defending champion, was left standing nervously and watching as the crowd heaped praise on the younger challenger. Lysacek, who had finished 12th, seventh, fifth, third and second at these competitions since 2002, held a 78.99 to 78.14 lead after the short program Thursday. His philosophy for the free skate was simple - and risky.
"You can't dethrone a leader (Weir) by skating hesitant," he said. "You go out and fight with passion and just go gangbusters."
Lysacek described the program as an artistic experience.
"It was a little bit surreal," he said. "Almost like an out-of body experience. I could almost hear my heart beating at times."
Weir, 22, of Delaware, failed in his bid to become the first American man since Brian Boitano to win a U.S. title four years in a row. Skating to "Child of Nazareth," Weir skated a smooth, more-lyrical program, marked by a hard fall on a triple jump midway. He scored 135.06 in the free skate, 213.20 for the competition.
Both Weir and Lysacek had discussed throwing a quadruple jump into their repertoire for Saturday night's free skate. Once Lysacek nailed his, Weir, who said he had been landing them well in practice, attempted his own quad jump, but two-footed the landing. "He beat me by 30 points," said Weir, never one to mince words. "He kicked my ass."
The three skaters will move on to the World Championships in Tokyo in March.
Meissner wins
World champion Kimmie Meissner capitalized on an error by her nearest rival to capture her first national title at the U.S. Figure Skating Championships in Spokane, Washington on Saturday.
Leading after the short program, Meissner could only finish third in the free skate section but her performance was still strong enough to capture the title when her closest challenger, Emily Hughes, fell on one of her jumps.
Hughes's mistake resulted in an automatic one-point deduction, which turned out to be the difference between the two skaters. "I'll try to get that perfect skate at the worlds," a smiling Meissner told reporters. "I'm really excited right now."
Alissa Czisny won the free skate and moved up from fifth to third place in the final overall standings.