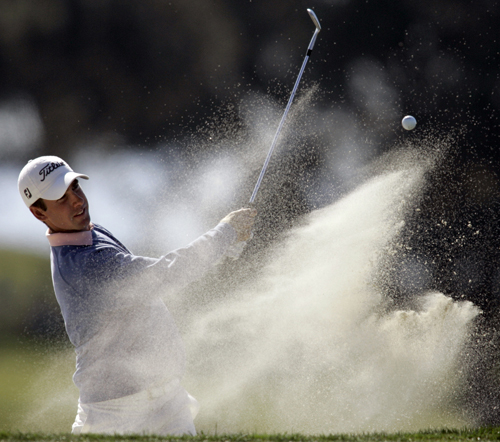 Tiger Woods said hello to Brandt Snedeker on the practice green Saturday morning.
Even knew his name.
"Good playing this week," said the greatest player in the world to the greatest player from Vanderbilt.
"I thought that was pretty phenomenal," Snedeker said. "I've never seen him hit a shot before in a tournament. But tomorrow I'm going to have the best front-row seat you can have."
Snedeker might not enjoy the view on Sunday, with Woods directly ahead of him, in the final round at Torrey Pines.
As he pointed out, Woods has won 41 more tournaments on the PGA Tour than Snedeker has started.
But here we are, 18 holes from the trophy, and the curly-haired 26-year-old from Nashville is playing as carefree as Opie. And he continues to leave laughter and applause behind him, as he weaves his way through.
"I'm worn out by the end of the day," Snedeker said. "I hit 74 shots today and it felt like 110."
That was still enough to get to the house at 11 under, which ties him with fellow rookie Andrew Buckle.
Woods sliced five shots off his personal deficit with a 3-under-par 69, but failed to birdie the par-5 18th and is still two shots behind.
Snedeker is even par since his fanciful start Thursday, when he found himself 10-under after 10 holes and wound up at 61.
He can't call time out. But he could have disappeared over a cliff Saturday when he bogeyed the sixth, seventh and eighth holes.
Sprinkled among all the botched chips and wayward sand shots was a 20-foot birdie on the 17th that tied Snedeker with Buckle. His par on 18 was only his fifth of the day. He hit three fairways and seven greens. He offsets that by ranking second in total distance of made putts.
No wonder his family, back home, will only watch the tournament replays this week. His golf is too lifelike.
"People who know me say it's a Brandt Snedeker type of round," he said.
n Goosen wins in Qatar
South African Retief Goosen won the US$2.2 million Qatar Masters with a one-stroke victory over Australian Nick O'Hern. The South African, aiming for his first win in more than a year after a disappointing 2006, held his nerve on the final hole to curl in an eagle to finish the tournament on 15 under par 273.
That put him ahead of O'Hern, who was a shot ahead of the two-time US Open champion before heading to the final hole.
O'Hern finished agonizingly short of winning his first ever title on the European Tour with a 70 in the final round to finish on 274.
Ernie Els, the 2005 winner, mounted a determined bid for his second win in Qatar, but finished third on 275.
Stuart Appleby and Richard Green of Australia and Graeme McDowell of Northern Ireland tied for fourth place with 12 under par 276.