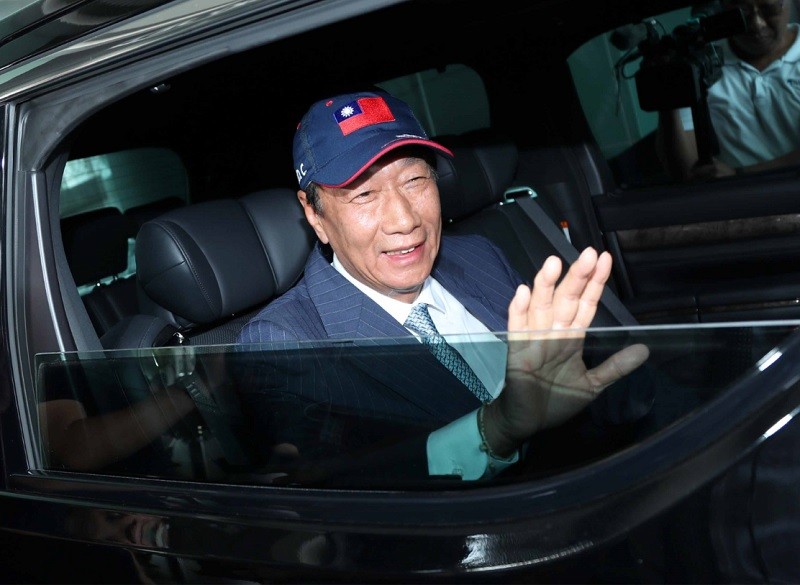 Business tycoon Terry Gou (郭台銘) will not agree to represent the opposition Kuomintang (KMT) in the 2020 presidential election if he is asked to replace the current candidate, one of his aides said Monday, amid reports that the KMT was planning such a move.

If Gou decides to run in the election next January, he will do so as an independent, his aide Tsai Chin-yu (蔡沁瑜) said, commenting on a local media report that the KMT was planning to dump its candidate Han Kuo-yu (韓國瑜) because of his stagnant poll numbers.

According to the report, Han, who won the KMT primary in July, has been showing no signs of overtaking the frontrunner President Tsai Ing-wen (蔡英文) of the Democratic Progressive Party (DPP) in recent public opinion polls.

The KMT, therefore, is planning to drop Han in favor of Gou, who was defeated in the party primary in a five-way contest, the report said.

Tsai Chin-yu said, however, that Gou would not go along with any such plan but rather would run as an independent if he decided to compete in the 2020 presidential election.

"That is an internal KMT matter," the aide said.

"Chang did recently call our campaign team to convey Wu's interest in meeting with Gou but did not mention the possibility of asking Gou to represent the KMT in 2020," the aide said.

The news report, which appeared on the website Up Media on Sunday, cited an unnamed source, saying that Chang and Gou had met recently to talk about the KMT's decision to replace Han.

According to the report, Chang also told China's Taiwan Affairs Office (TAO) last month that the KMT was planning to withdraw Han in favor of Gou.

Asked Monday to comment on the news report, Chang denied it completely, saying that during his recent meeting with TAO officials in China, he did not discuss the 2020 presidential elections or the KMT campaign.

Chang said he visited the TAO on Aug. 8 at the request of Chairman Wu, who wanted to convey concern over Beijing's recent ban on individual visits to Taiwan by residents of 47 municipalities, which would affect the livelihood of many Taiwanese.

To the best of his knowledge, Chang said, the KMT has no plans to replace Han as its 2020 presidential candidate.

Cheng Mei-hua (程美華), acting director-general of the KMT's Cultural and Communications Committee, also rejected the Up Media report, telling CNA that it was groundless and fictitious.

"Wu has said repeatedly that the party needs to unite to help Han win," Cheng said, adding that there is no way the KMT will replace Han with a new candidate.