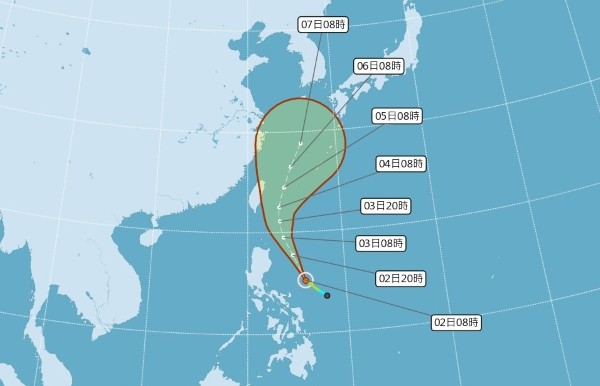 TAIPEI (Taiwan News) -- As three tropical storms are taking shape in the Western Pacific today, Tropical Storm Lingling has been christened and is currently expected to come closest to Taiwan on Sept. 4 and 5.

The Japan Meteorological Agency (JMA) announced today (Sept. 2), that Lingling, the 13th tropical storm this year, has officially formed. The Central Weather Bureau (CWB) predicts that it will move in a northerly direction and come closest to Taiwan on Wednesday and Thursday (Sept. 4 and 5). As of 2 a.m. today, the CWB has listed two tropical depressions lurking in the Western Pacific:

As of 2 a.m. today, the center of TD18 was located at 18.6 degrees north latitude and 112.2 degrees east longitude. It was moving west-southwest at a speed of 24 kilometers per hour (kph), packing maximum sustained winds of 54 kph with gusts of up to 82 kph.

As of 2 a.m. today, the center of TD19 was located at 14.2 degrees north latitude and 127.1 degrees east longitude. It was moving northwest at a speed of 54 kilometers per hour (kph) with gusts of up to 82 kph. At 8 a.m. this morning on his Facebook page, WeatherRisk Explore Inc. President Peng Chi-ming (彭啟明) said that the weather seen over the weekend will continue today and Tuesday (Sept. 3), including hot summer weather and afternoon thunderstorms. However, on Wednesday and Thursday, there may be a significant change in the weather, depending on the development of surrounding low-pressure systems.

Peng said there are currently three tropical systems in the Western Pacific, all of which are likely to develop into tropical storms. Peng predicted that Lingling will form today.

The tropical system of greatest concern is Lingling, which is situated southeast of Taiwan and to the east of the Philippine island of Luzon, said Peng. He said that it will continue to move northwest and begin to approach the waters off the eastern coast of Taiwan on Wednesday and Thursday. As for the weather on Monday and Tuesday, the development of heat convection will be enhanced in the afternoon. This will likely bring heavy rains, thunderstorms, and hail in some areas, said Peng.

The two tropical depressions will drive southwesterly winds and will increase moisture significantly in Taiwan by Thursday. Peng predicted that rain will be likely from Thursday through the weekend.

The next two tropical storms to form will be called Kajiki and Faxai.