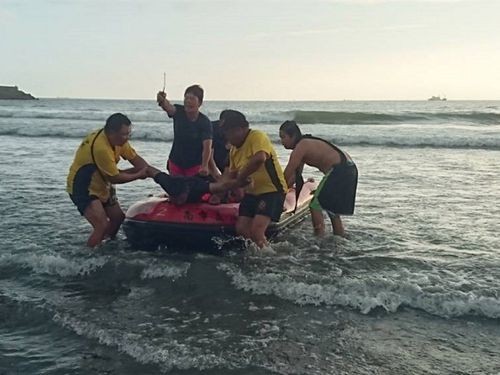 TAIPEI (Taiwan News) -- A Filipino migrant worker drowned on Sunday (Sept. 1) in Tainan, and a Vietnamese man is undergoing emergency treatment after falling into the ocean in Kaohsiung.

The Tainan City Government Fire Bureau said that it received a report of a drowning near Sunset Platform in Tainan's Anping District at 5:25 on Sunday, reported CNA. The bureau dispatched eight vehicles, 18 rescue workers, and life rafts to the scene.

Rescue workers retrieved six male Filipino migrant workers and brought them to shore on life rafts. Three were rushed to three nearby hospitals, while the other three were able to walk away on their own power, according to the report.

One 30-year-old male was found to have lost cardiopulmonary function at the scene and was rushed to Kuo General Hospital. However, doctors were unable to resuscitate him and they declared him dead at 6 p.m. A 28-year-old male was taken to the Ministry of Health and Welfare's Tainan Hospital, where doctors believe he is now out of danger. He is still currently being kept under observation at the hospital.

After contacting the workers' broker, the Tainan City Labor Affairs Bureau found that the workers had taken advantage of a day off to go to church and to go traveling. As for the details of what occurred while the six went swimming off of Sunset Platform, further investigation will be needed, according to the bureau.

Rescuers who were on the scene told CNA that waters off of Sunset Platform were not suitable for swimming on Sunday. They said that they hoped brokers would take this opportunity to advise migrant workers to avoid swimming in that vicinity. Also on Sunday, a Vietnamese migrant worker was knocked off a breakwater jetty near Yong'an Bridge in Kaohsiung City's Mituo District, reported CNA. At 3:28 p.m., the Coast Guard Administration received a report of a drowning and dispatched boats and aircraft to the scene.

A 6:28 p.m., a Coast Guard ship spotted the 29-year-old Vietnamese man and rescued him from the sea. He was found to have suffered cardiopulmonary arrest, but after being rushed to the hospital, doctors were able to resuscitate him.

He is currently still in the hospital undergoing treatment. Police said that the man had gone fishing in the area with a number of fellow Vietnamese that afternoon. 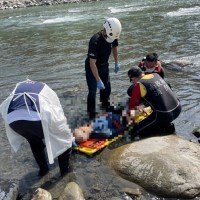