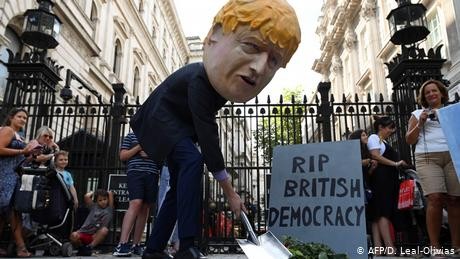 On Saturday, thousands of demonstrators took to the streets across the United Kingdom to protest against Johnson's decision to suspend Parliament ahead of the current October 31 Brexit deadline. Meanwhile, his opponents are working behind the scenes, but time is running out. The week to come will be crucial — that is when British Parliament will meet again for the first time after the summer break, and they must have a plan by then.

The majority of parliamentarians are against leaving the EU without some kind of agreement. And an increasing number of MPs intend to force Boris Johnson to rule out this possibility. This is a power struggle between government and Parliament in which MPs are now under pressure because Johnson is taking away the remaining time they have to agree on a common approach.

Labour politician and Brexit committee chairperson Hilary Benn admits he is nervous. Having just returned from a holiday in Scotland, he is one of the few answering journalists' questions outside the Houses of Parliament after Johnson's political grenade. Many other politicians have not yet returned from their summer break. At this point it is not clear whether Johnson's opponents will be able to agree on a common policy. "We simply have to be more effective than him," says Benn. But that is exactly what the opposition has failed to do so far.

Benn hopes that next week Parliament will be able to come up with a law that asks for an extension in the case of an unregulated Brexit. Benn believes that every member of Parliament will have to go soul-searching and face his or her conscience, because, after all, the consequences could be devastating: food could become scarce, prices will rise, uncertainty for entrepreneurs will be unending. According to Benn, only another referendum can lead the way out of the crisis: "People now have an idea of what Brexit will look like. They should decide again whether they really want that."

Lara Spirit, from youth organisation OFOC ("Our Future Our Choice") is fighting for a second referendum too. According Spirit, what happens over the next six weeks will be crucial. Many activists have been visiting music festivals throughout the summer; they want to mobilize young people to sign into the electoral register — assuming it is likely that new elections will be held within the next few weeks.

The question of whether Brexit should be put to the vote again is dividing the country. The Room Thirty-Two hair salon is not usually a place where people talk about politics, but since the Brexit vote things have changed. Hairdressers Ian and Melvin, both over fifty, can find no common ground on the situation. "We're not arguing, but we're debating," says Melvin, a convinced Brexiteer.

Ian has voted to remain in the EU; he owns a house in France and feels European. While Ian hopes that a second referendum will still be able to stop Brexit, Melvin doesn't consider this to be the solution. He believes it is undemocratic if politicians let the people vote until they finally like the results. But despite all his support for Johnson's Brexit course, Melvin doesn't think it's right simply to suspend Parliament either.

Another referendum on the horizon after all?

How realistic is it to expect that politicians will agree on a common approach? Very, says Hugo Dixon, vice-chairperson of the "People´s Vote Campaign," which is advocating for a new vote. By deciding to suspend Parliament, Boris Johnson has united his opponents. Even moderate conservative MPs are outraged, and they are now more likely to work together with the opposition.

Dixon considers the chances of stopping Brexit to be higher than ever. It would be best if members of Parliament proceeded step by step: First, they would have to pass a law that would undo the suspension of Parliament, which would buy them time. The second step would be to force Boris Johnson to postpone the date of leaving the EU in order to then hold a second referendum.

Not everyone is as optimistic as Dixon. Spirit warns that opposition politicians urgently need to reach an agreement. "The Brexit party has announced that it will adhere to a non-aggression pact with the conservatives. If pro-EU parties don't do the same, things are going to look bleak for us."

Benn, too, seems more cautious. He might be an optimist at heart, he says, but everything depends on whether it will be possible to bring enough MPs together next week.

What is clear is that Boris Johnson is taking a very risky course. If he is able to convince the EU to make new concessions on the withdrawal agreement at the summit at the end of October, Parliament will have little choice in the end but to approve this agreement, unless it can come up with an alternative plan. Should Parliament not succeed in forcing Johnson to give in, and were the EU ultimately to remain steadfast, a hard, unregulated Brexit would be unavoidable.