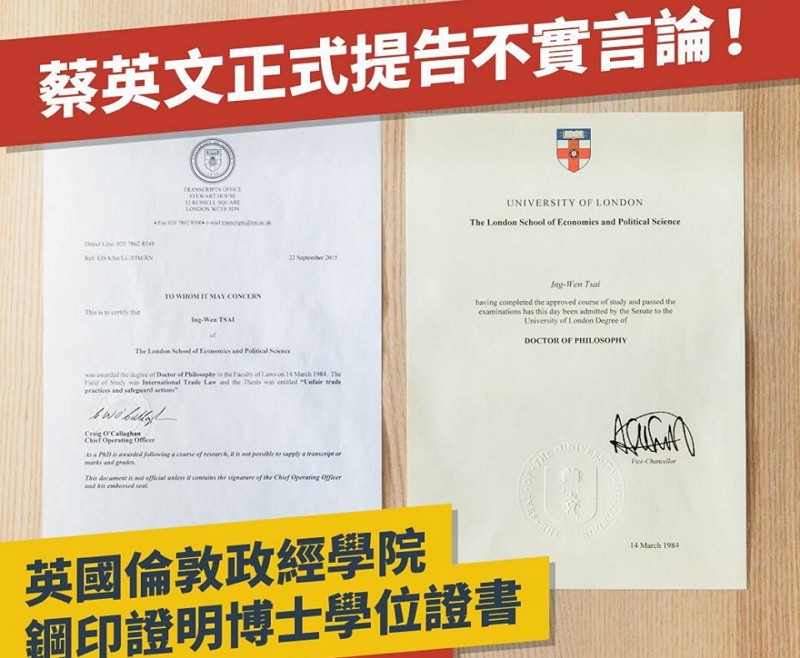 TAIPEI (Taiwan News) – The Office of the President announced on Thursday (Aug. 29) it will lodge a lawsuit against those who question the academic credentials of President Tsai Ing-wen (蔡英文).

In a press conference held on Thursday, Ho De-fen (賀德芬), a professor emeritus at National Taiwan University, released the results of what she called an independent investigation into the authenticity of Tsai’s doctoral dissertation from the London School of Economics and Political Science (LSE), reported Storm Media. The investigation was conducted by Hwan C. Lin (林環牆), an assistance professor at the University of North Carolina at Charlotte.

For months, the leader of Taiwan has been pestered by allegations that she had never obtained the diploma. In July, the LSE issued a statement confirming that Tsai graduated from the school in 1984 with a PhD in law.

Ho alleges that Tsai did not pass her PhD dissertation defense in 1984 and pointed out that there are missing pages in the document. Ho has also raised a number of issues that she says make the accusations justifiable, including the unavailability of Tsai’s dissertation at the British Library and University of London Library, the report said.

In response, the president said in a Facebook post that she will take legal action against individuals who challenge her diploma. She denounced such acts as rumor mongering and spreading fake news.

Tsai reiterated that a dissertation is required for anyone to be conferred a PhD by the LSE while posting a photo of her diploma with the school's embossed stamp. She called for a stop to the smear campaign against her, which she slammed as disrupting society and diverting public attention from some of the more important issues that deserve discussion.