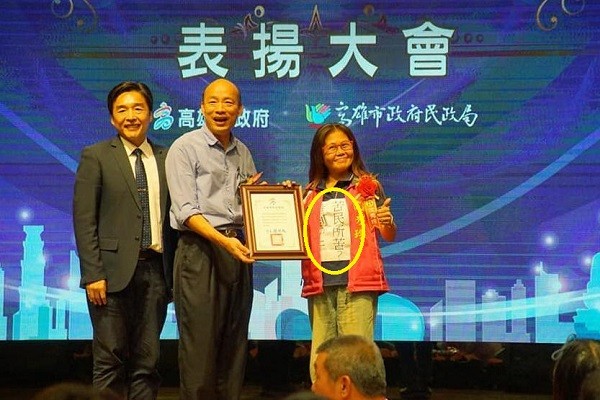 Reminiscent of student protests at award ceremonies earlier this year, when Shen was called to the stage to accept an award from Han at a banquet at a restaurant in Kaohsiung's Daliao District, she suddenly unzipped her jacket. She then opened her jacket to reveal a sign which read "Suffer what the people suffer, sleep until noon" (苦民所苦、睡到中午) as she grinned a gave thumbs up for a photo with Han.

Shen later said to the media that she told Han on stage that his "backyard is on fire," a reference to Terry Gou possibly making a presidential bid, reported Liberty Times. She then told Han to "hurry up and step down [as mayor] and run for president."

She said she also asked Han to work harder as mayor and to stop doing "ridiculous things," like climbing trees and drilling underground tunnels. Shen also complained that during the heavy rains on July 19, the floodwaters reached 92 cm, inundating hundreds of homes in her borough, according to the report.

Shen said that the flooding had been caused by the Kaohsiung government's closure of three gates in the retention basin, causing the flooding in her borough. She said that Han and the city have yet to apologize, and since he has no intention of managing a city, she thinks he should go ahead and focus on running for president.

Moments later, when Chuang was called to the stage, he tried to hand Han a petition for his recall as mayor wrapped in a bamboo sushi rolling mat. Han asked him, "Are you protesting?" before gesturing for Chuang to exit the stage and refusing to accept the scroll, reported Liberty Times. After the ceremony, Chuang tried to hand Han the scroll again, but he was pushed away and Han beat a hasty retreat to the elevator.

On his Facebook page, Chuang later wrote, "I'm a grassroots citizen, and a grassroots borough chief, when would I have a chance to meet the mayor? So I used the award ceremony as an opportunity to hand the petition directly to the mayor, hoping he would sign it too." He then wrote that whether Han signed the petition or not, he hoped he would resign and just focus on running for president, and added, "All the borough chiefs in Kaohsiung are more like mayors than the mayor." 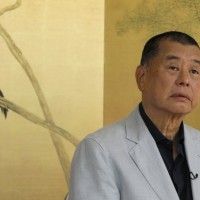 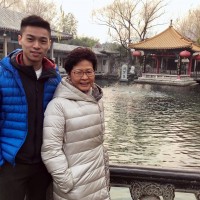 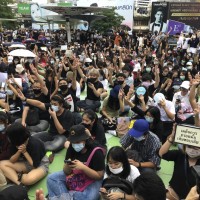