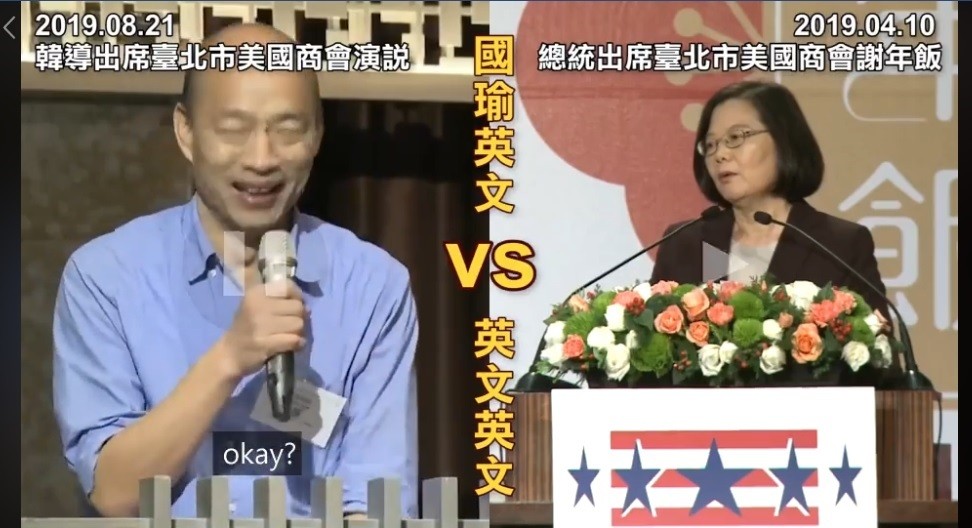 TAIPEI (Taiwan News) -- After a speech by itinerant Kaohsiung Mayor and full-time presidential candidate Han Kuo-yu (韓國瑜) at the American Chamber of Commerce (AmCham) last week was widely mocked for his Chinglish sentences, video has surfaced comparing his apparent poor command of English with an eloquent talk by President Tsai Ing-wen (蔡英文).

In a speech at an AmCham luncheon in Taipei on Aug. 21, Han was heard using a strange mixture of Mandarin with random English words and sentence fragments inserted in at various stages. On Aug. 23, Democratic Progressive Party (DPP) lawmaker Wang Ting-yu (王定宇) released a video showing the stark contrast between Han's Chinglish speech and Tsai's presentation given earlier at AmCham in fluent English.

In the video, Han first massacres AmCham Chairman Leo Seewald's name which the subtitles approximated as something like "Chairman Rayon To Go," before quickly going into Chinese. He then reminisces about being a "freshmale" in college and working at "American Club," as he apparently confuses AmCham with the American Club Taipei (ACC).

In contrast, the video cuts to Tsai calmly speaking about how great it is to be back at the American Chamber of Commerce again. She then says, "We are on the right path. We are building momentum. And we are showing results. For all of you, and the people of Taiwan. We want a future where Taiwan is strong, but on our own terms, based on our values and interests."

Subsequently, the video cuts back to Han saying his "tuition in the fee 都是 [are all] American Champer pay me. Okay?" Again, Han seems to be confusing AmCham with ACC.

Tsai can then be heard elaborating on her plans for seeking investment while still maintaining Taiwan's principles: "We're not asking for handouts. We want investments that are sustainable, and we want to sell things in a way that doesn't compromise our democracy and our way of life." She then tailors the talk to address the businessmen in the audience with, "And as you all know, it's just like running a business..."

When sharing the video, Wang wrote: "Choice; comes from reflection, comparison. Comparison; enables you to know the pros and cons, requirements. And then... Who could be so cruel to make this comparison video? What is crueler... sharing it!"

At a press conference on Monday, Premier Su Tseng-chang (蘇貞昌) said that it has become popular for young girls to use Chinglish sentences such as "我是很 [I am very] busy，因為我很多 [because I have many] things要 [must] do." However, he said that speaking as the Kuomintang's (KMT's) presidential candidate in such a manner in front of Americans, "does not seem so cute and would cause Americans to laugh to death."

Netizens were aghast at Han's poor command of the English language:

"I'm shocked to see a graduate from the Foreign Language Department at Soochow University speak English like this. Even if he took night classes, he should be able to speak entirely in English. He really has a problem with his attitude! Very disrespectful to everyone present!"

"So Han Kuo-yu's English is really bad. Why insert English? There is no national identity at all. Why don't you speak Chinese the entire time? It's a shame."

"This has a chance at winning the soundtrack of the year award."