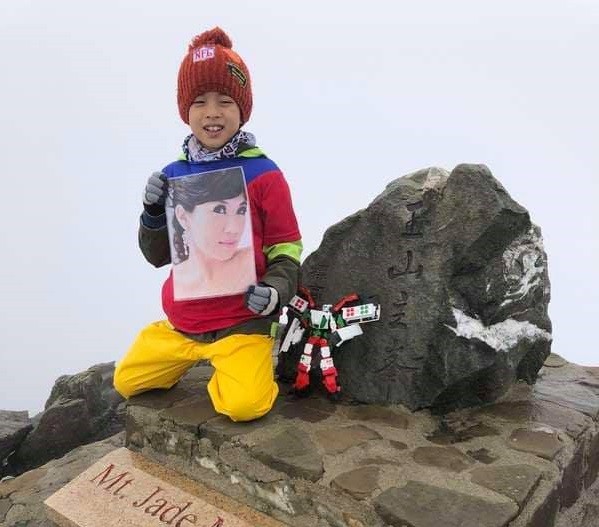 TAIPEI (Taiwan News) – An eight-year-old boy from Yilan took his mother’s photo to the top of the highest mountain in Taiwan on Aug. 19 to fulfill a promise he made to her before she died of an illness last year, the Central News Agency (CNA) reported on Sunday (Aug. 25).

The boy, Zhou Ze-gang (鄒澤綱), had heard stories about mountain climbing from his father, Zhou Pin-wei (鄒品為), who is a mountaineering enthusiast, CNA reported. Four years ago, when Zhou Ze-gang's mother Chang Lan-qi (張嵐綺) told him about Yushan, Taiwan’s highest mountain, he hoped his mother would one day take him to its peak.

However, the boy’s mother told him, “I had surgery in my foot, and couldn’t go hiking. After you grow up and have an opportunity to climb Yushan, take a memento of me to the top of the mountain,” and the boy nodded to signify his agreement, according to the report.

Unfortunately, the boy’s mother died of illness last year, yet the boy has always remembered the promise he made to his mother and occasionally would ask his father, “Mommy has been in Heaven. Yushan is so high, and if I go to the top of the mountain, maybe I’ll be closer to Mommy,” the report said.

Mr. Zhou said on Sunday that he was very moved to hear what his son had to say and decided to fulfill his dream by training his endurance regularly on hiking trails. The two entered the drawing to climb Yushan in early August, and after getting permits, they set out from Yilan on Aug. 17, taking Lan-qi's photo with them,

During the hike to the summit, Ze-gang suffered from altitude sickness, and his father advised him to give up the trip and go another time, according to the CNA report. However, Ze-gang insisted on continuing the hike, saying “No, I have to do what I promised Mommy.”

Later tha boy's sickness eased and almost totally disappeared as the father and son made their final ascent to the summit of Yushan Main Peak.

At 8:30 a.m. on Aug. 19, they successfully reached the summit, 3,952 meters above sea level. Holding his mother’s picture, Ze-gang happily posed for photos at the summit.

“Mommy, here I come, closer to you in Heaven. How are you?" the boy said, according to CNA. “Will Mommy come to my dreams more often after I fulfill the promise?”

Ze-gang's father admitted that scaling Yushan is indeed a challenge for an eight-year-old, but because of his love for his mother, his son held fast to his promise, according to the report. Even though their wife and mother gone, the love the family has for her has never gone away, he added.

In a Facebook post, Mr. Zhou thanked all the people who encouraged them along the way during their hike to the summit. He added that he hoped his wife in Heaven would be able to see their son's achievement.