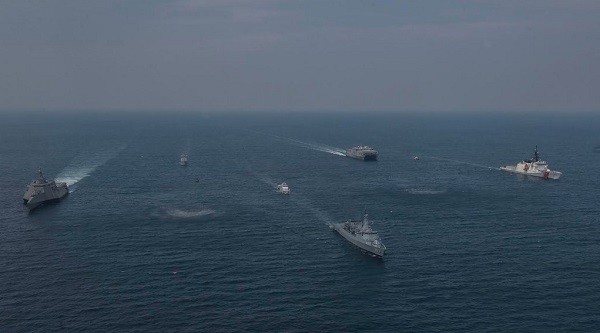 TAIPEI (Taiwan News) -- Naval exercises between the U.S. and 10 Southeast Asian nations will take place for the first time from September 2 to 6 in the Gulf of Thailand.

At least eight warships and two aircraft will take part in the drills, which will start at Sattahip Naval Base in the southeastern Thai province of Chonburi, the Royal Thai Navy said via a statement. The vessels will spend the bulk of the 5-day operation off the coast of Vietnam's Cà Mau province.

The exercises will be jointly led by Capt. Matt Jerbi, commodore of the U.S. Seventh Fleet's Destroyer Squadron 7, and Thai Rear Admiral Sompong Nakthong. They mark the first such collaboration between naval forces of U.S. and members of the Association of Southeast Asian Nations (ASEAN).

The operation is aimed to "maintain maritime security, focus on prevention and pre-empt wrongdoing in the sea," according to a U.S embassy statement. To that end, U.S. forces will send out "suspicious" boats for their Southeast Asian partners to track down and "legally prosecute," reported the Agence France-Press.

The multilateral effort comes as an increasingly bold China flexes its muscle in the Pacific, particularly in the South China Sea, bringing it into conflict with several ASEAN member states with overlapping territorial claims, including those of Vietnam. Recently, a Chinese survey ship has once again been violating Vietnam's exclusive economic zone despite repeated government protestations.

The U.S. has been stepping up its military presence in the region. This has, so far, taken the form of coordinated exercises and freedom of navigation operations, such as Friday's (Aug. 23) transit through the Taiwan Strait​​​​​​, to counter China's assertiveness and reassure allies.

However, Thai Lt. Gen. Kongcheep Tantravanich claims that next month's drills are unrelated to geopolitical concerns. In a statement, he referenced the drills ASEAN conducted with China last fall: "We held exercises with China, now we are having exercises with the U.S. ... it has nothing to do with the current situation."