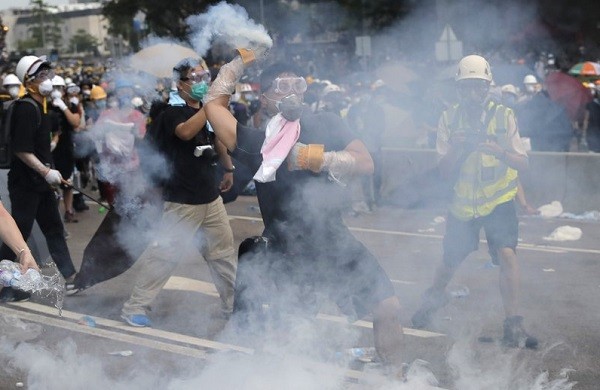 TAIPEI (Taiwan News) -- As Hong Kong's police force employs increasingly brutal tactics to quash the protests that have gripped the city since June, including the use of tear gas indoors, gas masks have become a rare commodity, and some pro-democracy protesters are turning to Taiwan to meet the demand.

Police in Hong Kong have fired in excess of 1,800 tear gas canisters at protesters since the beginning of the city-wide demonstrations, which began in opposition to a bill that would permit extradition to China. With gas masks running out of stock in July and deliveries from China being halted to stymie protesters' efforts, sales of gas masks are surging in Taiwan.

According to one Taipei wholesaler, gas mask sales exceeded 3,000 in one month -- three times the total amount ordered in 2018. Another supplier in the city, Ceachain (世筌企業股份有限公司), has also seen a dramatic spike in mask sales, having already sold out of one brand, though other, equally effective masks are available as long as orders are made a day before pickup, the South China Morning Post (SCMP) reported.

Hong Kongers in Taiwan are reportedly making purchases in person on behalf of friends, typically buying multiple sets of masks and accompanying air filters and filter pads, according to a staff member at Fusheng Chemicals and Instruments. "The police have not guaranteed they won't use [tear gas] on the August 31 protest, so it might be safer for us to buy them here to prepare in advance," the SMCP quoted one Hong Kong customer as saying.

Pastor Huang Chen-sheng (黄春生) and the congregation of Chè-lâm Presbyterian Church (台灣基督長老教會濟南教會) are sympathetic toward the plight of protesters in the semi-autonomous region. Thus, they have been collecting defensive equipment such as goggles, gas masks, and air filters, delivering them by mail and through Hong Kongers returning home.

Huang said the Taipei church has become quite effective at assembling the equipment in the month since the operation began. Church members even instruct people in its proper use, the pastor told Radio Free Asia on Friday (Aug. 23).

Huang expressed concern that many young protesters put off replacing used filters, which lose their ability to neutralize toxins over time, due to their relatively high cost. "We say you must throw it away, the canister must be thrown away, and it needs to replaced. Later, we will collect a lot of canisters and send them," he said.