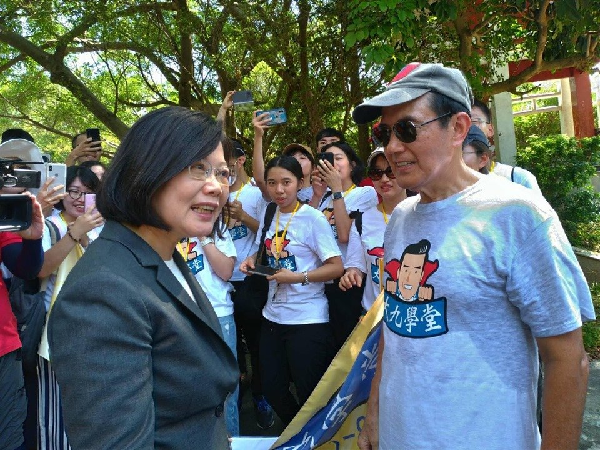 TAIPEI (Taiwan News) – On Friday (Aug. 23) morning, President Tsai Ing-wen (蔡英文) made a trip to Kinmen island in order to commemorate the Second Taiwan Strait Crisis, which began on Aug. 23, 1958.

Tsai had just attended an 823 memorial service at the Taiwushan (太武山) shrine and veteran’s cemetery. President Ma Ying-jeou (馬英九), who was leading a study tour sponsored by his non-profit foundation, was coming down the mountain with program attendees after paying respects at the service.

The two presidents were recorded exchanging pleasantries before the media and public. Ma later uploaded videos and photos of the meeting to his Facebook account, reports UDN.

President Tsai told Ma that he looked like he was doing well. She offered some words of encouragement to Ma and the students accompanying him before she departed.

Friday marks the 61st anniversary of the beginning of the Second Taiwan Strait Crisis, which began with the shelling of Kinmen by Chinese forces in August 1958. UDN reports that this is the first time Tsai has attended the memorial service in Kinmen since she took office in 2016.

The Second Taiwan Strait Crisis marks the period in 1958 in which China launched a month-long artillery bombardment campaign targeting Taiwan’s outlying territories of Kinmen and the Matsu Islands. The attacks were meant to test the KMT’s defenses as well as the extent to which the U.S. was willing to defend Taiwanese forces.

The U.S. dispatched Navy vessels to protect supply lines to Taiwan and several Air Force contingents to defend the skies over Kinmen and Matsu. In total, an estimated 440 soldiers under KMT command died defending Taiwan in the conflict.