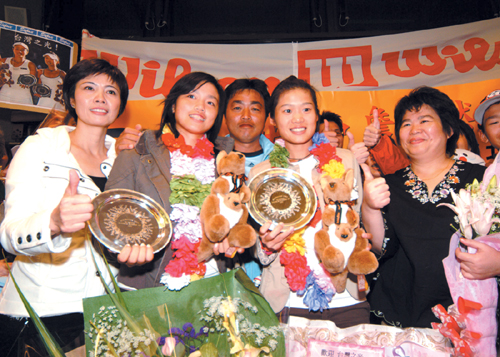 A popular actress who fell into a deep coma after being in a serious car accident that occurred late Friday night remained in critical condition as of press time yesterday.
According to the police, a truck rear-ended the white sedan in which actress Hsu Wei-lun and a friend were riding after the car crashed into a guard rail on National Expressway No. 1. Hsu's vehicle skidded and came to a halt between the freeway shoulder and outermost lane before being hit.
Hsu and her friend, surnamed Lin, were rushed to Cheng Ching Hospital in central Taichung City following the accident.
"Hsu still remains in a critically life-threatening condition while Lin is conscious and suffered only minor injuries and a contusion," said Wu Cheng-chang, the director of the hospital's intensive care center, at a press conference held yesterday afternoon.
"Hsu's suffered a blow to the head and was seriously injured," Wu added. "Her Glasgow Coma Score is only 3 and she has been given 10,000 cc's of blood."
The Glasgow Coma Score measures coma levels on a scale ranging from 3 to 15, with 3 indicating the deepest coma level.
Wu added when Hsu arrived at the hospital, she was having trouble breathing and suffering from shock.
After inserting a breathing tube into her nose and handling the shock problem, doctors found that Hsu was suffering multiple traumas, including hemorrhaging in the brain, cerebral edema, which is an excessive accumulation of water in the brain, and a hemothorax, or the accumulation of blood in the chest, according to Wu.
The doctor said Hsu's mother wept and was very worried about Hsu's condition, and hoped that the public could pray for her daughter.