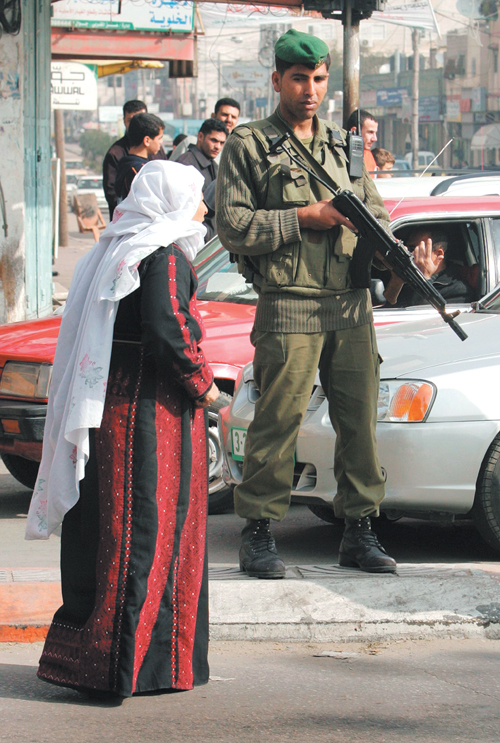 Gunmen exchanged fire near Gaza City's Islamic University yesterday, killing two men on the third straight day of Hamas-Fatah factional fighting.
The deaths brought to 19 the number of Palestinians killed since late Thursday, and a least 66 people were wounded. The rival Hamas and Fatah movements traded angry accusations, and each held several supporters of the other side hostage.
The violence froze talks about bringing Fatah into the Hamas-led government, negotiators said. Fatah's leader, moderate Palestinian President Mahmoud Abbas, said he would go ahead with his plan to call early elections if the coalition negotiations don't produce results within two to three weeks.
The Gaza fighting, which started late Thursday, was among the deadliest in nearly two months. Gun battles raged across Gaza City on Friday and continued early yesterday. One man was killed late Thursday, followed by 16 deaths on Friday and two more yesterday.
Before dawn yesterday, Hamas gunmen fired mortars at the Abbas-allied Preventive Security Service headquarters and at the home of the force's chief, Rashid Abu Shbak, officials said.
Tensions have been high since Hamas swept parliamentary elections in January 2006, ending four decades of Fatah rule. Those tensions have frequently erupted into violence, killing some 50 people in Gaza since early December.
Paralyzed by a boycott
Hamas promised to root out corruption and improve social services. But the Hamas-led government has been paralyzed by an international boycott and accomplished little on its agenda.
The government has also had trouble paying the salaries of 165,000 civil servants, including some 80,000 members of the security forces, most loyal to Abbas.
A senior Abbas aide said yesterday that the president will use some of the US$100 million in tax rebates recently transferred by Israel to pay the salaries of the security forces.
In all, Abbas is spending US$152 million for salaries and other items, such as debt payment and welfare services, his aide, Rafiq Husseini, told a news conference.
Abbas has also received US$30 million from the United Arab Emirates and US$22 million from Qatar, Husseini said.
Israel and Western donors have cut off hundreds of millions of U.S. dollars in funding to the Palestinian government, demanding Hamas renounce violence and recognize Israel's right to exist. Hamas has rejected the conditions, despite deepening poverty in the West Bank and Gaza caused by the sanctions.
The international community has rerouted some of the aid to the moderate Abbas. Husseini said the president's office disbursed US$285 million in 2006, but that it was not enough to cover salaries or maintain vital services.
Seeking a way out of the crisis, Abbas has called on Hamas to join Fatah in a moderate coalition government. Abbas, who was elected separately, hopes a moderate platform will get the sanctions lifted and allow him to restart peace talks with Israel.