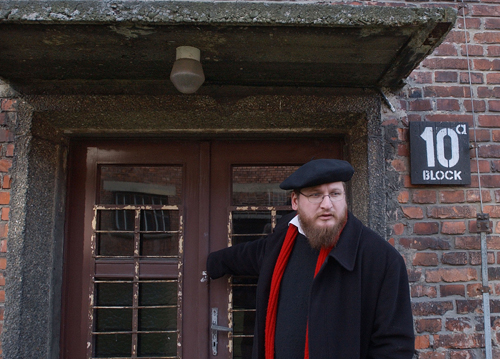 Witnesses to the Holocaust were gathering at Auschwitz yesterday as they do every January 27, the anniversary of its liberation by Soviet troops - each year growing older, frailer, and fewer.
After 62 years, another witness - the camp site itself - is also showing signs of aging under the pressures of mass tourism and time.
Its new director is searching for ways to preserve vital evidence of Nazi crimes and update the exhibits without chipping away at Auschwitz's authenticity - or giving fodder for Holocaust deniers.
"The biggest dilemma of this place is preserving what is authentic while also keeping it possible for people to see and to touch," said Piotr Cywinski, a 34-year-old historian who took over in September.
"This wasn't built as a medieval castle with strong materials to last for all time," Cywinski told The Associated Press in an interview in his office in one of the Auschwitz barracks. "It was a Nazi camp built to last a short time."
Most sensitive, perhaps, is what to do about the remains of gas chambers which are slowly sinking into the ground, the result of weather, erosion and gravity.
The Nazis themselves blew up the gas chambers and crematoria toward the end of World War II as the Soviet army approached. Today they lie mostly in ruins as the Nazis left them, evidence of both the original crimes and the German attempt to cover them up.
Any decay at all poses a problem given the camp's role today in standing as a testimony of the atrocities inflicted on Jews, Gypsies, Polish political prisoners, homosexuals and others. Still visible are the railroad tracks along which inmates were brought in, the barracks where they lived in inhumane conditions, the gas chambers where they were murdered and the crematoria where their bodies were burned.
Historical evidence
For all that to crumble would deprive future generations of priceless historical evidence of Nazi atrocities - a further concern in light of Holocaust denial. The site provides a clear picture of how the camp operated - while many other former Nazi death camps, including Treblinka and Belzec, were dismantled and are marked today only by monuments.
Auschwitz's eventual decay is hastened because the materials used - like wood in watchtowers and barracks - will eventually rot or collapse.
Cywinski also notes that some structures at the camp were constructed by weak and starving inmates who would exert the minimum effort in order to preserve their strength.
Auschwitz is actually not one camp, but two, each with its own problems. Auschwitz I was built in an abandoned Polish military base, and Auschwitz II, or Birkenau, is a much larger complex that went up three kilometers away during the war to speed up the Nazis' Final Solution.
Together, Auschwitz-Birkenau stands as a global metaphor of evil and a symbol of all Nazi crimes - so making any change at all is fraught with great responsibility and potential controversy.
Cywinski is calling for retainer walls to be built around gas chambers to prevent them from sinking further.
"We are at a moment where we have to act," Cywinski said. "If we don't, there's the risk that in 10 or 15 years, it will no longer be possible to understand their construction."
But any tampering with the gas chambers is problematic because Holocaust deniers could seize on that - and photographs of repair work - to try to argue that the whole thing was fabricated, according to Jonathan Webber, a professor of Jewish studies at the University of Birmingham and a member of the International Auschwitz Council, a board that advises Auschwitz administrators.
Webber noted that the barbed wire at Auschwitz has already been replaced more than once since the war, since the original was so rusted. But "fiddling with the gas chambers" is something completely different.
Holocaust commemoration
"Anyone tampering with gas chambers is tampering with the heart and soul of what Auschwitz represents," said Webber, who has urged the council to seek the advice of the best engineering experts in the world before starting with any work.
Another mission Cywinski has set for himself is modernizing the exhibition at Auschwitz I first set up in 1955. Included in the exhibition housed in the original brick barracks are photographs of camp inmates, SS offices left in their original state down to the picture of Adolf Hitler on the wall, and displays of suitcases, twisted eyeglasses, and hair taken from victims before being killed.
Cywinski says he doesn't want any of that removed, but says some modernization is needed because the exhibition no longer meets international museum standards. He stresses that he is only starting now to decide how exactly to modernize, and that all decisions would be made after consulting with world-class authorities on Holocaust commemoration.
One of those is Yad Vashem, the Holocaust memorial in Israel, which says it welcomes the decision to update the museum. "It is a logical step for a museum that was erected in the 1950s," spokeswoman Estee Yaari told the AP.
The exhibition "was at the time created for people who remembered the war very well," said Cywinski. "Now we have a generation of young people whose parents don't even remember the war. ... If we don't change it, this exhibition will say always less to the next generations."