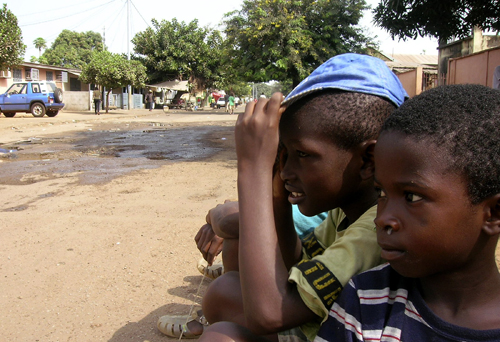 Nine-year-old Illiassou Barry thought someone had punched her as she clutched her stomach in pain and called out to her mother in the courtyard of their family compound.
She had just returned from buying food in the Hamdallaye-Concasseur suburb of Guinea's capital Conakry when riot police opened fire to disperse protesters down the street during a general strike paralyzing the country.
"She lost consciousness. Someone said it was a malaria attack, others said she had been struck down by the devil," said Anna Bah, 45, a neighbor who came running to help.
It was only when the little girl was laid out on her bed that her mother noticed the blood seeping onto her clothes. A stray bullet from an assault rifle had lodged itself deep in her abdomen.
"I saw the blood and I said someone has harmed her. But I did not know it was a bullet. I was in a panic," said Maladho Diallo Barry as she sat by her daughter's bedside in Conakry's Donka hospital.
Illiassou was one of the lucky ones. Doctors removed the gold-colored bullet, three and a half centimeters long, which Maladho keeps in her purse as evidence of what happened.
Guinea's human rights league says 60 people have been killed around the country since the start of a strike called more than two weeks ago to demand President Lansana Conte step aside after nearly a quarter century in power.
The real toll could be much higher because Muslim families in Guinea traditionally bury their dead within 24 hours, meaning some deaths in outlying suburbs and towns were likely to go unrecorded.
Most of the fatalities occurred as riot police and soldiers armed with tear gas grenades and assault rifles opened fire in suburbs around Conakry on Jan. 22 to stop stone-throwing protesters marching on the administrative heart of the city.
Calm has since returned and the government has promised an investigation, but many people fear that once the strike ends and normal life gradually resumes, the brutality of the security forces' repression will be forgotten by the authorities.
"January 22 should be consecrated as a day of martyrs to honor the memory of those who were shot down," said Louis Mbemba Soumah, a strike leader and secretary-general of the SNECG teachers' union.
Scenes of war
Hospitals struggled to cope as friends and relatives brought in the wounded.
International aid agencies including the U.N. World Food program and Medecins Sans Frontieres have been asked to help with emergency food rations and to fly medical supplies and humanitarian workers to towns in the interior.
"We're not trained in Guinea to deal with the war wounded. There are no civilian doctors trained for these sorts of casualties," said one doctor in central Conakry's Ignace Deen hospital.
A few burned-out cars, the charred remains of rubbish piled up in barricades, shattered glass and smashed paving stones still scar the main avenue running through Hamdallaye-Concasseur.
But on Illiassou's red dust backstreet of tin-roofed homes among mango and avocado trees, little evidence remains of the clashes with police.
"We were dreaming. It never happened," commented one photographer who witnessed the violence as he watched a state TV news bulletin which gave scant coverage to the strike and showed no images of the unrest.
The former French colony, rated the most corrupt country in Africa by watchdog Transparency International, already had an appalling record on human rights.
A report by U.S.-based Human Rights Watch last year said the police routinely tortured suspects including children and had brutalized, killed and raped bystanders in political protests which were mounting in the country.
Red berets - members of Conte's Presidential Guard - have been going from home to home looking for suspected ringleaders and looters. Families in some suburbs erected barricades of corrugated iron sheets and wood across their compound gates to protect themselves from raids.
Union leaders and government officials are holding negotiations meant to end with the appointment of a new prime minister and guarantees that Conte will withdraw from government affairs.
But some in Guinea, too busy trying to cope with the grinding poverty of daily life, doubt whether their attempt at a popular uprising will have brought about much change.
"The lower class who have never been to school live in total confusion in this country, we don't know if (the politicians) are just playing a game," said Anna Bah. "Whether people are suffering or not, they don't really care."