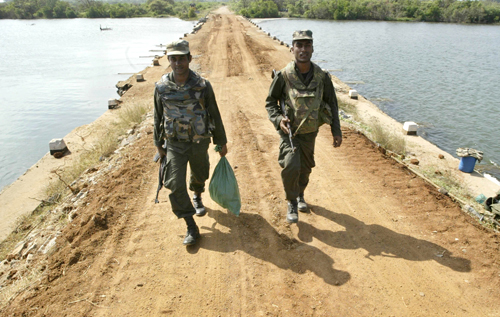 What started off as military push to clear Tamil Tiger artillery guns from a strategic harbor in northeast Sri Lanka has culminated in a mission to defeat the rebels completely - with no clear winner in sight.
Emboldened by the capture of a key Tamil Tiger stronghold, Sri Lanka has vowed to go on the offensive to seek to destroy the rebels' entire military machine in the apparent belief it can finally win a two-decade civil war.
But observers say President Mahinda Rajapakse's government and military are underestimating the Tigers, and could simply plunge themselves deeper into a war that has killed more than 67,000 people since 1983 - and 4,000 in the past year alone.
"They're on a roll. They think they can win," said one foreign diplomat on condition of anonymity. "I think they are going to try something ... I think the fighting's going to continue because neither side has a motivation to stop."
"On the side of the government, the hawks are in the driving seat and they're going to go forward because they think they're winning ... and they think they can go all the way," the diplomat added. "(The Tigers) need to do something to achieve parity."
As troops hunt down routed Tamil Tigers in Sri Lanka's eastern jungles and consolidate their grip on an eastern coastal swathe of what used to be rebel-held territory, the security forces have the upper hand for now.
But the Liberation Tigers of Tamil Eelam withdrew from the area to fight another day, and analysts say their military apparatus is still intact.
Defense Secretary Gotabhaya Rajapakse, the President's brother, says the military will seek and destroy all rebel military assets - including in the northern de facto state they control under the terms of a tattered 2002 ceasefire.
The Tigers, who resumed their fight for an independent state in the north and east after the majority-Sinhalese government ruled out their demands for a separate homeland for minority Tamils, warn they retain their military capability and can resort to guerrilla jungle warfare.
"This is a very clear enunciation that the government will wage all-out war against the Tamil Tiger rebels until they are defeated," said Iqbal Athas, an analyst with Jane's defense Weekly in Colombo.
"It will mean there is going to be bloody war in the weeks and months to come," he added. "This very clearly shows that there won't be a peace process until such time as the LTTE agrees (to talks) or the LTTE is militarily defeated."
Athas said the fact the rebels' powerful naval arm was still intact, and their fighters still retained their capability because they withdrew rather than facing a full frontal assault, meant the Tigers are still a formidable opponent.
"With the capture of Vakarai in the east, the government has certainly has got the upper hand, but that is not to say that the Tigers' military capability has in any way been dented," he said.
"Completely eliminating the Tigers from the east is going to be a gigantic task for the army," he added. "We can't rule out the fact they (the Tigers) may try to open up new fronts."
The foes have turned a deaf ear to repeated calls from an increasingly worried international community to halt the fighting and stop mushrooming rights abuses like murders and abductions.
And many observers and ordinary Sri Lankans are worried fighting will escalate at a time when hundreds of thousands of civilians remain displaced in camps and rudimentary shelters because of war past and present.
"We are concerned that with the Tigers being driven out of the east, that this could lead to fighting spreading," said Thorfinnur Omarsson, spokesman for Nordic ceasefire monitors the Sri Lanka Monitoring Mission.
"Both sides are talking tough, and that is definitely not in the spirit of the ceasefire agreement."