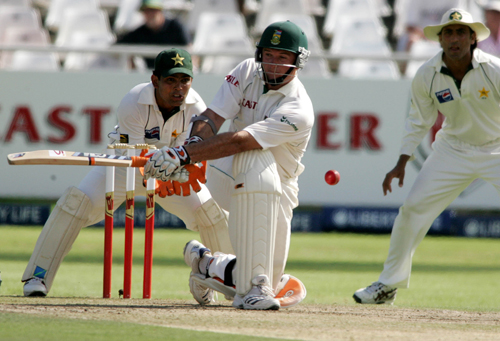 Pakistan was struggling to set a challenging target as wickets continued to fall on the second day of the decisive third and final Test against South Africa at Newlands yesterday.
Pakistan was 117 for six in its second innings at tea, an overall lead of 91, in an extraordinary match in which 26 wickets had fallen for 457 runs.
Pakistan captain Inzamam-ul-Haq carried his team's hopes as the last remaining recognized batsman after Dale Steyn and Andrew Hall took two wickets each for South Africa. Inzamam was 19 not out.
South Africa earlier missed the chance to build a substantial first-innings lead over Pakistan when it lost its last five wickets for 52 runs.
South Africa slumped to 183 all out, a lead of 26 runs following Pakistan's first-innings dismissal on Friday's first day at Newlands.
After South Africa resumed on, 131-5, Ashwell Prince was caught by Mohammad Hameed off Kaneria for 19 in the third over of the day. Paul Harris was caught for 1 in the slips by Younis Khan off Asif two balls later and Andrew Hall faced 15 balls before being caught behind by Kamran Akmal off Kaneria for 4.
Mark Boucher and Dale Steyn took South Africa pass Pakistan's total in the 51st over, but Mohammad Asif's pace and Danish Kaneria's spin continued to prove too much.
Steyn was run out and Makaya Ntini was last man out for 3, as Boucher finished the innings with 40 - a total second only to captain and opener Graeme Smith's 64 on Friday.
England hits rock bottom
England batsman Ian Bell says his side hit rock bottom in its embarrassing nine-wicket loss to Australia in the latest one-day international in Adelaide.
England was routed Friday for just 110 by Australia in 34.3 overs and Bell, who top-scored with 35, said the loss was even more disappointing than Ashes failures earlier in the tour.
Bell said the defeat was his lowest point as an England player.
"Probably for me it is (the lowest point). Yesterday wasn't the highlight of my career playing for England so far," he said in Adelaide yesterday.
"When we get to Perth we'll sit down and talk. I don't think straight after the game was really the time to do that... and today we've got to reflect on it and make sure it doesn't happen again," he added.
"As individuals, we can't start making excuses. I think all of us have to take the blame for this."
Bell said England still had plenty to play for and still hoped they could be competitive in the World Cup, just six weeks away.