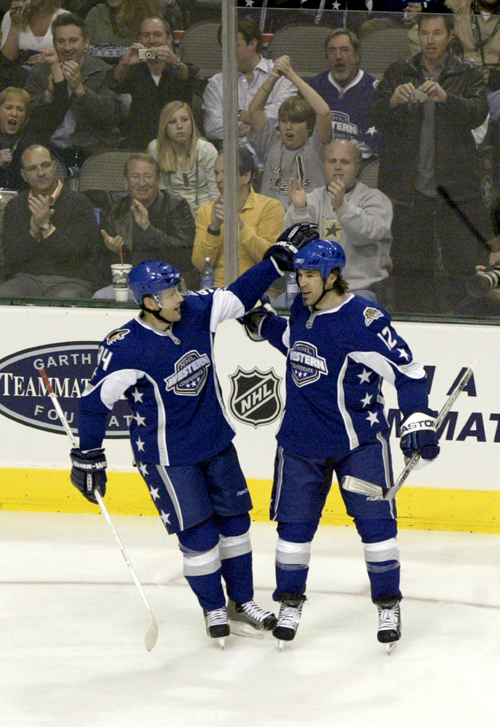 Perhaps we were all wrong about this Sidney Crosby kid.
Maybe it's Yanic Perreault and Brian Rolston who are going to lead the NHL out of the woods.
The best-laid plans of Madison Avenue took a little bit of a detour Wednesday night. During the 55th NHL All-Star Game, shining stars Crosby and Alexander Ovechkin had to take a backseat to fellow first-time All-Stars, such as Rolston, 33, and Perreault, 35.
And while it would be easy to laugh at such a turn of events during a 12-9 victory for the Western Conference at American Airlines Center, it underscores just how difficult it is to sell a superstar in the NHL.
Stars goalie coach Andy Moog calls the NHL the best game on earth for the simple reason that it takes an entire team to win. The last guy on the bench can make the most important play of any given game. And how many other sports put their superstars out there for only 30-40 percent of the game?
But whereas that balance makes the sport great, it also makes it very tough to sell. When Dallas Channel 8's Dale Hansen used to count down the days before Michael Jordan would come to town with the Chicago Bulls, fans knew Jordan would put on a show. He touched the ball on probably 75 percent of the trips up the floor.
Wayne Gretzky, meanwhile, wasn't even on the ice for half of the game.
So if a fan new to the NHL settles into his seat and asks where Crosby is, he might be a little baffled to see the star is sitting on the bench.
He might be even more confused if the talented center, who leads the league in scoring, doesn't get on the scoresheet - especially in an All-Star Game.
But it happens in the NHL. A lot.
And that makes selling tough.
The history of the game is immersed in stories of great role players. Guy Carbonneau and Mike Keane were keys to the 1998-99 Dallas Stars. Try to tell insiders they were less important than Joe Nieuwendyk or Brett Hull. They earned their stripes with hard work, not flash.
The history of team plays runs through the league so much that hotdogging can actually get you into trouble with opponents and teammates. Although goal celebrations can get fun, most players grow up believing it's better to keep things on the down low.
Hull said he rarely made a fuss over his goals because he didn't want to draw attention to himself. Truth is, few know the history of the game better than Hull, and he knew that hockey players operate with a certain celebratory decorum. How do you sell that?
When NHL commissioner Gary Bettman was asked about the importance of Crosby and Ovechkin this week, he replied, "You know, we're blessed with having an incredible crop of young players." That might have been the right answer, but it wasn't the one that will sell the superstars.
And that's why the league's battle for exposure could be difficult. On some nights, Crosby will be the best player on the ice. On others, it will be Rolston or Perreault.
That is the beauty of this league . . . and its curse.
In Friday night NHL action: Columbus 3, Buffalo 2; Carolina 6, Washington 2; Atlanta 5, NY Islanders 4; New Jersey 2, Tampa Bay 0; St. Louis 2, Detroit 1, OT; Minnesota 2, Calgary 1, SO; Nashville 3, Chicago 1; Pittsburgh 4, Dallas 3, SO; San Jose 5, Edmonton 1; Phoenix 5, Colorado 4, SO; Los Angeles 3, Vancouver 2, OT.