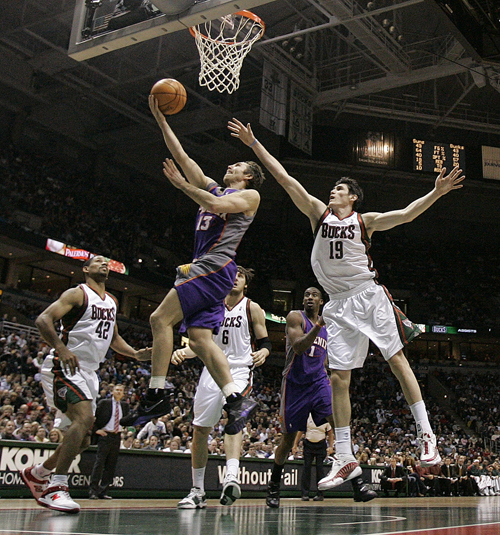 After taking a forearm to the windpipe from Ruben Patterson during the game, Shawn Marion's voice was reduced to little more than a whisper Friday night.
But Marion's game spoke volumes, and his monstrous 11-point, 23-rebound effort was sorely needed to keep a banged-up Bucks team from putting a second Suns 15-game winning streak in a choke-hold.
While the rest of the Suns sputtered, Marion and 27 points from Raja Bell were just enough to beat Milwaukee, 98-90, and nudge the winning streak to a franchise-record 16 - which ties for the ninth longest in NBA history.
"We did what we had to do to win, that's all that matters," Marion said softly. "(The streak) is a proud achievement. You can't really take it all in yet."
Especially since the Suns didn't feel particularly unbeatable after eking past a Milwaukee team that has lost six straight and 11 of its last 12 and played without leading scorers Michael Redd and Mo Williams - who combined for 68 points when the teams last met in Phoenix. But while Charlie Bell led six Bucks in double figures with 21, the toughest Suns opponent all night was their own lackadaisical play.
Steve Nash had 18 points and 16 assists, and was only two turnovers shy of a triple-double. The Phoenix bench missed 20 of 23 shots and produced a paltry 10 points, while the interior defense yielded 52 points in the paint and 23 second-chance points to the bigger, tougher Bucks.
"We got up 10 points a few times, and we'd let them right back in," Nash said. "We set a franchise record for wins in a row, but it only feels like half of them have been good performances. It's going to bite us in the butt one of these days."
That could have been Friday if not for Bell's seven 3-pointers and Marion's dogged pursuit of every rebound and loose ball (three steals). Seven of his rebounds were on the offensive end and two came late when the Suns really need them. His only blocked shot of the game came with 40 seconds left when he stuffed Ersan Illyasova (13 points) and forced a 24-second violation.
"Shawn was just a beast. He kept us alive," coach Mike D'Antoni said. "We missed shots all over the place. Maybe the day off I gave them (Thursday) lying around the hotel got us where we were. But someone always seems to come up with something. Tonight, it was Shawn and Raja."
Bell was a miserable 1-for-11 from the field in New York, but took advantage of Milwaukee's defense collapsing on the Phoenix pick-and-roll to drain wide-open jumpers.
"Some teams leave me open, and some teams don't," he said. "Tonight was one of the nights when I was the guy open a lot, and when you're that open you have to shoot the ball."
The Suns are now an incredible 32-2 over the last 34 games. They are 19-1 against the East, including 11-0 on the road - the first team to do that since the Utah Jazz in 1994-95. Their 35 wins matches Dallas for the most in the NBA and they lead the Mavericks by a half-game overall.
In other NBA action: Toronto 96, Boston 90; Cleveland 105, Philadelphia 97; Atlanta 93, Orlando 90; New York 116, Miami 96; Washington 99, Detroit 96; New Orleans 88, Sacramento 84; San Antonio 112, Memphis 96; Phoenix 98, Milwaukee 90; Houston 99, Portland 69; Utah 116, Denver 111; Charlotte 106, LA Lakers 97, OT; Seattle 102, Minnesota 100.