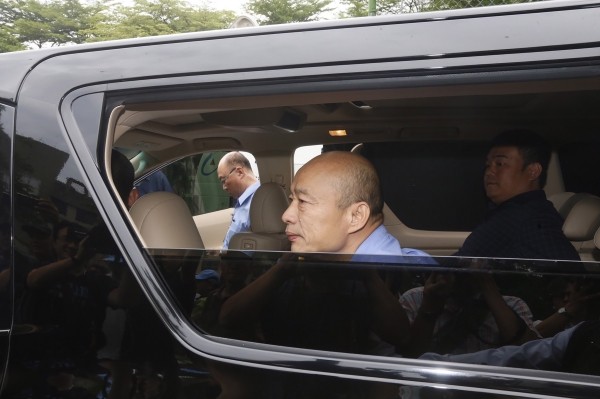 TAIPEI (Taiwan News) -- Itinerant Kaohsiung Mayor and full-time presidential candidate Han Kuo-yu (韓國瑜) claims that a tracking device has been surreptitiously placed in his car, but the Presidential Office denies that any illegal monitoring has been carried out.

At a press conference at the Kaohsiung City Government, Han said that the central government surveillance apparatus has been highly active, and a tracking device may have been placed in his vehicle, reported CNA. He said that he felt it is wrong that the government would monitor him and his family, and he wishes to lodge a protest.

In response to Han's allegations, presidential spokesman Chang Chun-han (張惇涵) at noon today (Aug. 20) said the relevant government departments would not carry out such illegal monitoring of the actions of specific persons, according to CNA. Chang said that politicians should not make such accusations without providing evidence.

In response to charges that a tracking device has been placed in Han's vehicle, the Taiwan Ciaotou District Prosecutors Office responded by saying that installing such a tracker constitutes Offense of Interference with Personal Privacy (妨害秘密罪) and is indictable only upon complaint. However, the office said that no relevant information has been received so far, according to the report.

In a phone interview with CNA, Kaohsiung City Police Chief Li Yung-kuei (李永癸) said that the police department has yet to receive a complaint over the matter as of noon today. As for the so-called "tracker" and whether a complaint has been filed, Han's camp said that "We're very clear, we found out as soon as it was taken in for maintenance."

President Tsai Ing-wen's spokesman Juan Chao-hsiung (阮昭雄) said they are confident that the public still has fresh memories of past events, such as the "headphone incident" and "lip balm controversy." For the sake of public trust, Juan suggested that Han take the initiative to provide the evidence and immediately report the case to prosecutors.