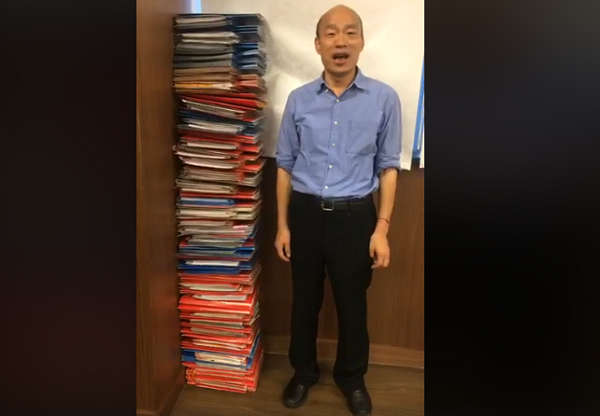 Previously, Su has criticized the Kaohsiung mayor for being unproductive. In his own defense, Han claimed that he often has to approve 10 official documents each day, to which Su retorted that he reviews so many documents a day that you could stack them taller than a man’s height.

Not to be outdone or belittled, Han took to Facebook on Monday with a video entitled “The inspiring and hardest working mayor in all of Taiwan” where he addressed the premier standing next to a large number of neatly stacked folders. In Mayor Han’s mind, the stack of documents likely proves that he is just as industrious as Premier Su.

In his video, Han said that the effectiveness of a political leader cannot be gauged by how high one’s pile of documents is. It must be judged by the seriousness with which a leader commits to the tasks he is responsible for.