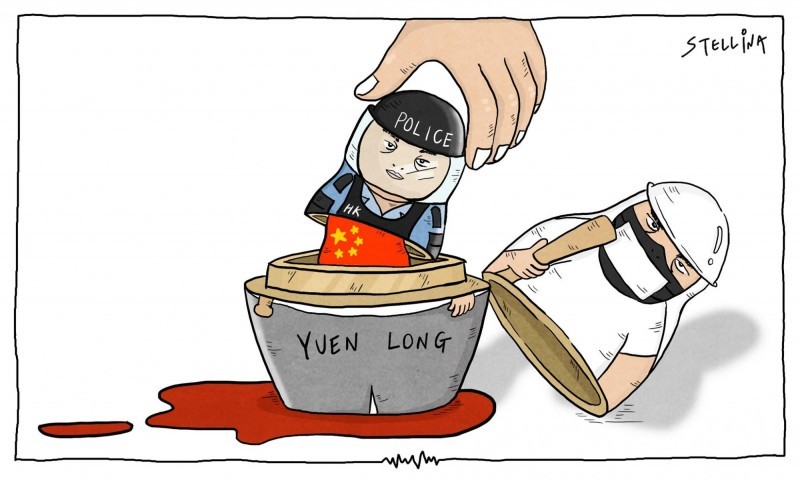 TAIPEI (Taiwan News) -- In response to the Yuen Long MRT attack, Taiwanese illustrator Stellina Chen (陳筱涵) published her satirical take on the true source behind the assaults in the French newspaper Le Monde on Aug. 13.

On July 21, a mob of over 100 armed men wearing white T-shirts indiscriminately attacked civilians and passengers in Hong Kong's Yuen Long MTR Station. Despite the fact that 45 people were injured from the unprovoked attacks, police did not arrive for 30 minutes and no arrests were made that night, causing many to suspect that the police were complicit in the assaults.

On a Facebook post on July 23, Chen uploaded an illustration of a man with a white T-shirt and surgical mask carrying a club in the shape of a Russian Matryoshka doll sitting in a pool of blood. Underneath the man is white is a blue doll labeled "Police," and beneath that is a figure covered in the red flag of Communist China.

In the accompanying text, Chen wrote in Chinese "The true face of the Yuen Long white clothes?" On Aug. 13, the illustration was published in the French newspaper Le Monde's Cartooning for Peace section with the title "The crisis is getting bogged down."