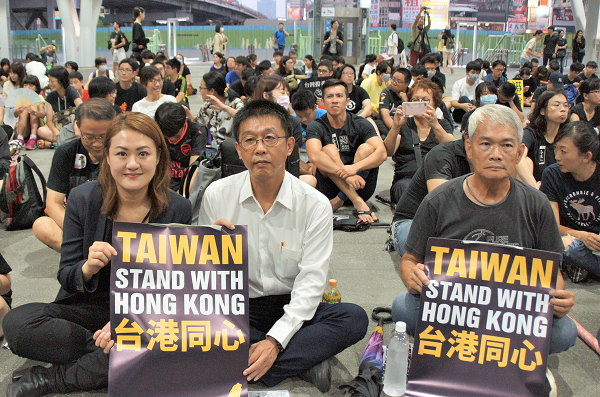 The group organized street screenings, flash mobs and sit-in protests in Taipei, New Taipei, Taoyuan, Taichung, Kaohsiung and other cities to show solidarity with the demonstrators in Hong Kong.

The participants are urging the Hong Kong government to set up an independent commission of inquiry to probe police brutality during ongoing anti-extradition protests, said Dora, a Hong Kong student who has been in Taiwan for six years and a spokesperson of the flash mob event in front of Taipei 101.

At the event, people wore masks and eye patches in solidarity with a young protester who was hit in the eye by a projectile fired by police on Aug. 11.

Regarding news that more than 10,000 Chinese police officers have gathered for anti-riot drills in Shenzhen across the border from Hong Kong, Dora said a bloodbath against civilians is the biggest fear of the Hong Kong people.

Dora said she hopes the international community can come to understand the current situation in Hong Kong and support their cause. Taoyuan Empowerment, the organizer for the event in Taoyuan City, said it sought to collect 250 helmets, as well as gas masks and protective equipment, on Saturday.

In Hsinchu City, meanwhile, the local organizer created a "Lennon Wall" at the underpass of the Eastern Gate, mirroring the mosaic wall created during the Umbrella Movement in Hong Kong.

The artwork on the wall consists mainly of post-it notes, displaying the demands of the Hong Kong people and photos of the ongoing anti-extradition bill protests. In southern Taiwan's Kaohsiung, over 200 people attended a sit-in at the Kaohsiung Main Station Saturday night. Demonstrators wrote words of encouragement on colorful post-it notes and stuck them on standing signs to mirror the "Lennon Walls" in Hong Kong.

Tang Chun-yu (鄧俊儒), a Hong Kong student studying in Taiwan and a member of the organizer, said the post-it notes will be delivered to the Hong Kong protesters to support their movement.

A demonstrator, surnamed Lin, said he attended the Kaohsiung sit-in because he is worried that "today's Hong Kong" would become "tomorrow's Taiwan."