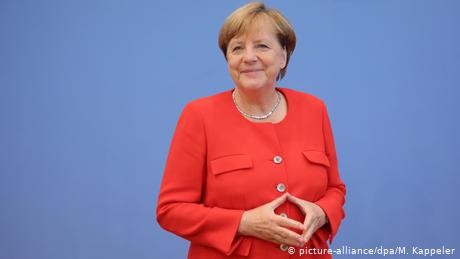 German Chancellor Angela Merkel on Thursday called for the resumption of European naval missions to rescue migrants in the Mediterranean.

Since 2015, tens of thousands of migrants were rescued by European naval ships as part of the bloc's anti-smuggling "Operation Sophia", which suspended activity earlier this year.

"It would certainly be good if today we had Operation Sophia and national navies that would carry out rescues," Merkel said in Berlin. She added that it would help with rescuing migrants as well as combating trafficking.

On Tuesday, Merkel also spoke out in support of sea rescues, calling them "a humanitarian imperative," according to the newspapers of the Redaktionsnetzwerk Deutschland.

Merkel emphasized, however, that fixing the root causes of migration are a top priority, as the issue of migrant rescues "will continue to exist if conditions in Africa do not stabilize."

"It's not always the poorest and the weakest that come. We are speaking with African countries about what we can do to help. We don't want to support smugglers and traffickers," she said.

Tensions with Italy over rescues

Italy had been opposed Operation Sophia on the grounds that rescued migrants were almost exclusively brought to Italian ports and threatened to block the mission if the rules weren't changed. It also challenged other states to take in more arrivals.

Germany had strongly supported the continuation of the naval mission.

While its primary mission was to combat smuggling gangs off Libya, it was also tasked with enforcing a weapons embargo on Libya.

The policy has led to repeated cases of NGO rescue boats holding rescued migrants in cramped and precarious conditions in the middle of the Mediterranean for days and sometimes weeks until other EU members states agree to take in the migrants.