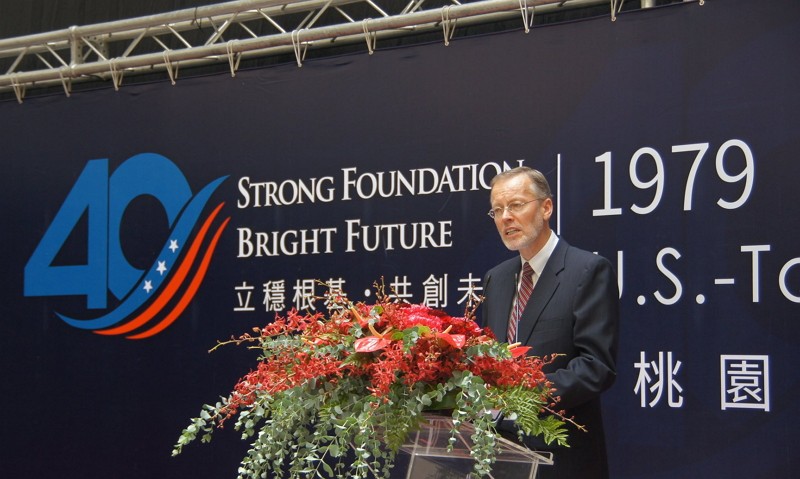 Taipei (CNA) The United States is strengthening its partnership with Taiwan under the Indo-Pacific Vision to ensure the island remains "free from coercion," the American Institute in Taiwan (AIT) said Wednesday as it celebrated Security Cooperation Month with Taiwan.

AIT Director Brent Christensen made the pronouncement during a policy address on security cooperation at an exhibition titled "Strong Foundation, Bright Future: AIT@40, U.S.-Taiwan Relations Since 1979" in Taoyuan.

"While one side flouts international norms, the other strives to be a responsible stakeholder. That is why Taiwan figures prominently as part of the U.S. government's vision for a free and open Indo-Pacific," Christensen said.

"Our engagement aims to ensure that Taiwan remains secure, confident, free from coercion, and able to peacefully and productively engage the mainland on its own terms," he added.

Christensen, a former Air Force officer, pointed out that arms sales remain an important component of U.S. security cooperation with Taiwan, which aims to help the nation achieve the right capabilities to resist coercion.

Christensen also stressed that the U.S.-Taiwan security relationship is about more than armed sales, citing in-depth exchanges between the two militaries and cooperation in the field of humanitarian assistance and disaster response.

To further strengthen this relationship, a new "Indo-Pacific Security Fellows program" was launched at the event, in which AIT said it would identify outstanding mid-level civilian and military individuals and help them enhance their leadership abilities and expertise on regional security issues.

Christensen reiterated that the U.S.-Taiwan security cooperation relationship is grounded in the fundamental shared values of human rights, freedom and democracy.

"We are and will remain a true friend of Taiwan, and our commitment to the obligations enshrined in the Taiwan Relations Act is rock solid," he assured Taiwan in the speech.

The Taiwan Relations Act (TRA), which forms the cornerstone of U.S.-Taiwan relations, was signed by then-President Jimmy Carter April 10, 1979, retroactive to Jan. 1 of that year, when the U.S. switched diplomatic recognition from Taipei to Beijing.

The AIT was established later the same year to promote unofficial substantive relations between Taiwan and the U.S.