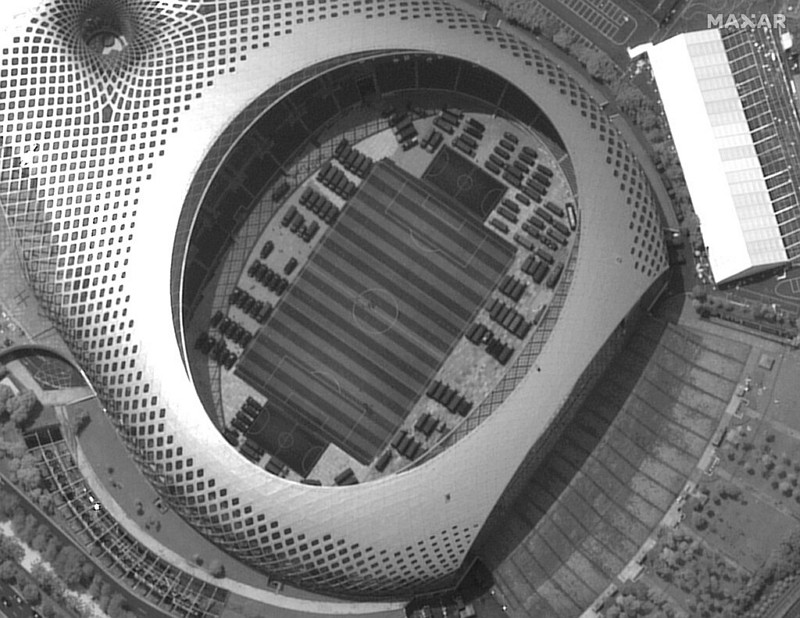 HONG KONG (AP) — Satellite photos show what appear to be armored personnel carriers and other vehicles belonging to the China's paramilitary People's Armed Police parked in a sports complex in the city of Shenzhen, in what some have interpreted as a threat from Beijing to use increased force against pro-democracy protesters across the border in Hong Kong.

The pictures collected on Monday by Maxar's WorldView show 500 or more vehicles sitting on and around the soccer stadium at the Shenzhen Bay Sports Center just across the harbor from Asian financial hub that has been rocked by more than two months of near-daily street demonstrations.

Chinese state media have said only that the exercises had been planned before hand and were not directly related to the unrest in Hong Kong, although they came shortly after the central government in Beijing said the protests were beginning to show the "sprouts of terrorism."

President Donald Trump tweeted that U.S. intelligence believes that the Chinese government is moving troops to its border with Hong Kong and that, "Everyone should be calm and safe!"

Beijing has been apparently reluctant to send in police or army units from the mainland or to mobilize the People's Liberation Army garrison in Hong Kong to quell the unrest. It's seen as mindful of the devastating effect that would have both on the territory's reputation as a safe and stable place to invest in, and as indication of the Communist Party's failure to win over the hearts and minds of the city's 7.3 million residents, 22 years after the former British colony was handed over to China.

It would also be a shocking reminder of the PLA's bloody crackdown on pro-democracy demonstrations centered on Beijing's Tiananmen Square 30 years ago, which remains a taboo subject in China but is memorialized with a massive rally and march each year in Hong Kong.

Yet, mainland China is believed to have already dispatched officers to fortify the ranks of the Hong Kong police, and may also have planted decoys among the protesters in order to encourage more violent acts that could eventually turn ordinary Hong Kongers against the protest movement.

Such a change in sentiments does not yet appear to have happened despite rising violence surrounding protests and the shutdown of the city's usually bustling international airport for two days after it was occupied by demonstrators.