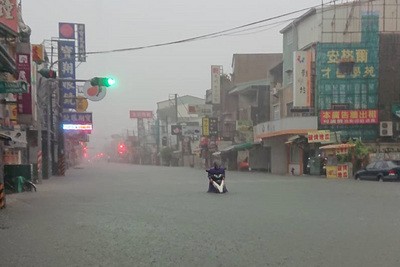 TAIPEI (Taiwan News) -- The Central Weather Bureau (CWB) has issued a heavy rain advisory in 11 counties and cities in western and southern Taiwan this morning (Aug. 13) as nearly 280 mm of rain fell in Tainan overnight.

Thunderstorms began late last night in Tainan. Although the rain was intermittent, it was intense at times.

This morning, flooding broke out in some areas of the city. In response, the Tainan City Government has immediately canceled work and classes for today. Overnight, heavy rain was accompanied by crashing thunder, disrupting sleep for many residents in Tainan. By 3 a.m., rain had begun to accumulate in some low-lying areas, including the culvert at Yongda Road and Kunda Road in the city's Yongkang District, which became impassable to traffic.

By 6 a.m., water deep enough to submerge an adult was spotted at the intersection of Kunda Road and Dawan Road in front of Kun Shan University, reported CNA. A snack shop owner told CNA that flooding started to occur at 3 a.m., and although he had closed his waterproof gate, water still managed to pour into the store, so he had to use pumps and buckets to get the water out.