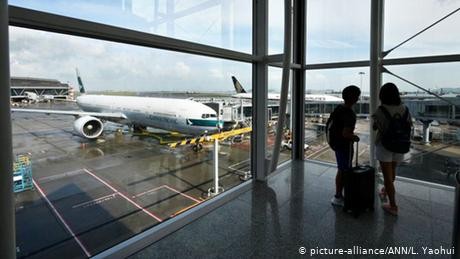 Operations at Hong Kong airport partially resumed early Tuesday, a day after flights at one of the world's busiest transport hubs were canceled due to pro-democracy protesters.

The Hong Kong airport website showed some flights had departed and landed, while dozens of others remained canceled or delayed.

Several thousand black-clad protesters staged a five-day peaceful demonstration at the airport that disrupted operations on Monday. By Tuesday morning, most of the protesters had cleared out, and posters and signs against China and the Hong Kong government had been taken down.

But graffiti — some reading "an eye for an eye," in reference to a protester who was shot in the face by police with a bean-bag round at a separate protest and reportedly lost sight in one eye — had not yet been cleared.

Protest organizers have said they plan to continue demonstrations at the airport later in the day to highlight to the international community the erosion of democracy and the encroachment of the long arm of mainland China into the affairs of the autonomous city state.

Adding to protesters' complaints, Hong Kong's flagship airline Cathay Pacific warned its staff on Monday that supporting "illegal protests" could result in being fired from the company.

Cathay's announcement follows new rules imposed by Beijing banning airline staff members who have been involved in the Hong Kong protests from flying to or over the mainland.

Hong Kong has seen nearly 10 weeks of sometimes violent protests against a now suspended extradition bill that would have allowed suspects to be tried in China.

The protests against the extradition law have since morphed into a broader movement against the Hong Kong government, police brutality and the encroachment of Beijing on the city's autonomy.

The protests represent the most serious political crisis in Hong Kong since it was returned from Britain to China in 1997 under a "one country, two systems" arrangement that preserved special rights for the city state. The demonstrations have posed a challenge to Chinese leader Xi Jinping, raising fears of direct intervention by Beijing.

Those concerns were heightened Monday after China's Hong Kong and Macao Affairs Office issued a statement saying the protests were "beginning to show the sprouts of terrorism" and constituted an "existential threat" to the population.

"One must take resolute action toward this violent criminality, showing no leniency or mercy," the statement read.

Some Hong Kong legal experts have warned that the description of protesters as "terrorists" may signal China's intention to make use of sweeping anti-terror laws. The People's Armed Police have also assembled in the neighboring city of Shenzhen for exercises.

The United States, Canada and European Union have called on all sides to show restraint and avoid violence that could escalate the situation in one of the world's main business hubs.