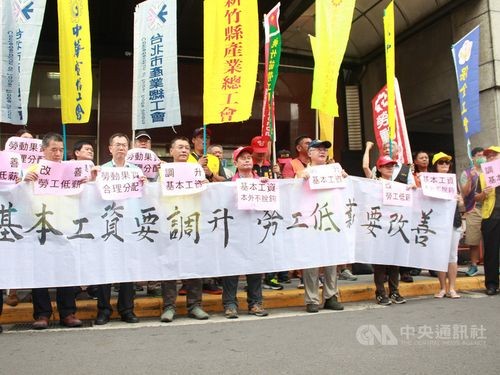 Several labor groups in Taiwan, including the Solidarity Labor Union and the Labor Rights Association, called Monday for an increase of at least 5 percent in the minimum wage,starting from 2020.

Prior to a meeting scheduled by the Basic Wage Deliberation Committee of the Ministry of Labor (MOL) for Wednesday, the labor groups held a joint news conference in front of the MOL to push for their demand.

Taiwan reviews its minimum wage every year, after which the Cabinet will consider a recommendation by the committee to finalize the increase. Before the Cabinet's decision is a time for labor groups and business groups to go to the bargaining table.

In response to the demand, the local business groups said that even if the MOL's committee recommends a hike Wednesday for next year, the increase should not top 3 percent.

In the news conference, Solidarity Labor Union Secretary-General Huang Yu-te (黃育德) said the government should have a legal mechanism in place for minimum wage hikes by enacting a minimum wage law.

Huang said through such a law, the government would be able to take into account important economic data such as the consumer price index when it studies minimum wage hikes.

The MOL said the ministry has already drafted a minimum wage law in late May and has submitted it to the Executive Yuan for review.

Lu Hsueh-ming (呂學民), head of the Confederation of Yilan Trade Unions, told the press that a total of about 2.5 million workers in Taiwan are paid the minimum wage, including many employees working for food companies in Yilan County, eastern Taiwan.

After the 13-kilometer Hsuehshan Tunnel, which connects Taipei and Yilan, opened in 2006, an influx of travelers into the county has pushed up consumer prices, but wages there have stayed flat, making their lives more difficult, Lu said.

For her part, Helen Cheng (鄭雅慧), chairwoman of the Confederation of Taipei Trade Unions, said that every year, the labor and business groups fight over only small increases in the minimum wage and she urged the MOL to bear in mind the interests of workers, since they are the very persons who really need assistance.

Ho Yu (何語), director of the Chinese National Federation of Industries, said that if the minimum wage is raised by 3 percent-5 percent, enterprises are expected to see their combined costs rising by NT$16.1 billion to NT$25 billion.

Ho said the ongoing trade dispute between the United States and China has affected the global economic fundamentals, and along with China's ban on independent tourist travel to Taiwan and the government's pension reforms, the local economy has been hurt.

He said the local business groups are calling for a freeze on the minimum wage to help enterprises fend off pressure from rising costs.