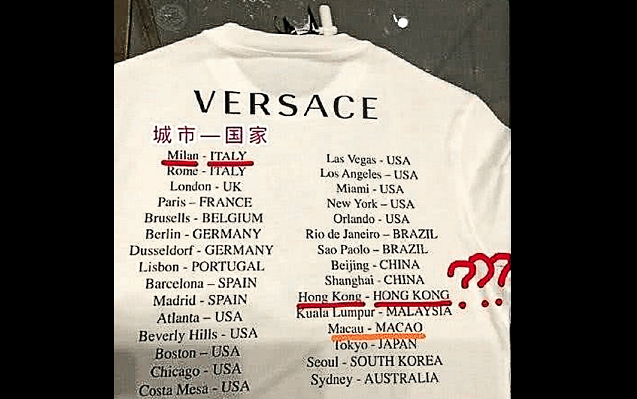 TAIPEI (Taiwan News) – The Italian fashion designer Versace is the target of criticism among Chinese internet users this week after a photo of a Versace t-shirt surfaced on Weibo, with the image drawing accusations that Versace is challenging Beijing’s “One China principle.”

The simple t-shirt design, featuring a list of cities, failed to designate Hong Kong and Macau as Chinese territory, instead printing “Hong Kong-HONG KONG” and “Macau-MACAO (sic)” in contrast to cities like Beijing and Shanghai, which were included in the list with “CHINA” displayed clearly next to them. As is typical of international brands with business interests in China, Versace was quick to issue an apology.

“I am deeply sorry for the unfortunate recent error that was made by our Company and that is being currently discussed on various social media channels. Never have I wanted to disrespect China’s National Sovereignty and this is why I wanted to personally apologize for such inaccuracy and for any distress that it might have caused.” @donatella_versace

The Company apologizes for the design of its product and a recall of the t-shirt has been implemented in July. The brand accepts accountability and is exploring actions to improve how we operate day-to-day to become more conscientious and aware. pic.twitter.com/5K8u3c4Dbm

Netizens shared their opinion in response to Versace’s apology, with many stating that the brand was being too politically correct and trying too hard to placate the Chinese government. Some observed that China would never issue an apology for the counterfeit Versace goods produced there.

Despite the brand’s effusive apology, at least some damage has already been done. Liberty Times reports that a Chinese actress, Yang Mi (楊冪), who previously promoted the brand for the Chinese market has cut ties and contracts with the company.

On the same day as the Versace apology, Yang announced she would no longer work with the company. She explained the decision with a declaration of nationalist belief stating that “safeguarding the unity of the motherland is the unwavering responsibility of every citizen.”

Versace is not the first high-profile Italian fashion company to come into conflict with angry Chinese netizens in recent years. Last year, designers Dolce & Gabbana were at the center of a controversy over a video involving a Chinese model, and an insulting remark posted by one of the designers on Instagram.