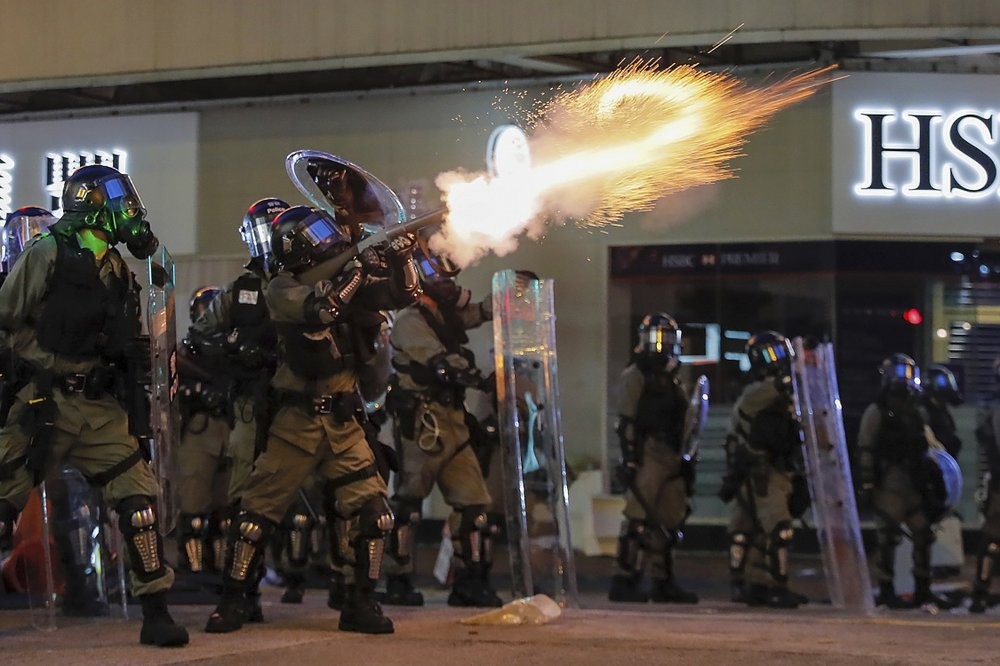 HONG KONG (AP) — Police fired tear gas Sunday inside a train station and in several other Hong Kong neighborhoods where protesters occupied roads in another weekend of anti-government demonstrations.

Protesters hurled bricks at officers and ignored warnings to leave before tear gas was deployed in the Sham Shui Po area, police said, calling a march there an “unauthorized assembly.” Nearby, protesters wearing gas masks gathered outside a police station in Cheung Sha Wan, as officers wearing their own protective gear looked down at them from a tall wall around the station.

Tear gas was also deployed in central Hong Kong on both sides of Victoria Harbour, in the Tsim Sha Tsui area on the Kowloon side and in Wan Chai on Hong Kong Island. At one point protesters blocked the entrance to a plaza to prevent police from entering. At Tsim Sha Tsui police station, authorities said, one officer was taken to the hospital after he sustained burns on his legs from a petrol bomb thrown by a protester.

A train station in Kwai Fong filled with smoke after about a dozen police officers fired tear gas inside. It was not clear how many protesters were inside the station at the time, but it has been rare for officers to fire tear gas indoors.

Earlier, a large group of mostly young protesters marched down the middle of Hennessey Road, a main shopping drag in the Causeway Bay area, as a rally was held in nearby Victoria Park. Many wore face masks to shield their identities, and a few had helmets. Others just carried backpacks over the black T-shirts that have become their uniform.

“We hope the world knows that Hong Kong is not the Hong Kong it used to be,” said one protester, Louisa Ho. “China is doing more and more to pressure Hong Kong, its people and its organizations.”

Hong Kong has seen nine weeks of protests, with no end in sight. The movement’s demands include the resignation of the Chinese territory’s leader, democratic elections, the release of those arrested in earlier protests and an investigation into police use of force against the protesters. A former British colony, Hong Kong was returned to China in 1997 under the principle of “one country, two systems,” which promises the city certain democratic rights not afforded to people on the mainland. But in recent years, some have accused the Communist Party-ruled central government of steadily chipping away at their freedoms.

Banners at the rally in Victoria Park read “Give Hong Kong back to us” and “Withdraw the evil law,” the latter a reference to an extradition bill that was the original spark for the protests. A large crowd sat under umbrellas, which are both a protest symbol in Hong Kong and protection from the summer heat.

Hannah Yu, an organizer, said the protest would provide a platform for people to rally peacefully. In what has become an established pattern, groups of protesters have taken over streets or besieged government buildings after largely peaceful marches and rallies earlier in the day.

“There will still be citizens going out on the streets to protest, but we cannot control them and we do not have the authority to control them,” Yu said.

Police permitted the rally in Victoria Park but denied a request by organizers to also have a march in the eastern part of Hong Kong Island. Police also denied permission for the march in Kowloon, but protesters went ahead anyway.

In the North Point neighborhood, a former Communist stronghold, brawls broke out throughout the day among a group of unidentified men, journalists and protesters. The men, some carrying Chinese flags, surrounded journalists in neon press vests and yelled at them.

Dozens of police stood guard in an attempt to control the situation, which repeatedly descended into scuffles. Newly pasted red banners around the neighborhood declared, “Protect Hong Kong; Fujianese people rise up to defend the homeland.” People from China’s southern Fujian province rallied Saturday in support of the police.

Officers in North Point on Sunday questioned four men dressed in white shirts — the uniform of thugs who injured 44 civilians inside a commuter rail station last month. It was not clear if the four men were arrested.

North Point was also the site last week of a fight between wooden pole-wielding men and protesters who defended themselves using makeshift shields and traffic cones.

Tiffany Law, a resident of one of the neighborhoods that had clashes, said she came out to help protesters after hearing that many were arrested earlier in the night. She said many area residents did not support the demonstrations.

“But if they see how the police throw all this tear gas, they might understand,” Law said. 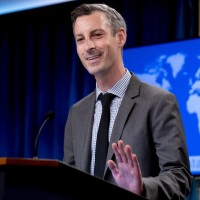 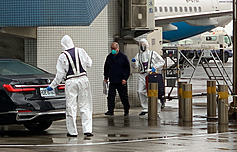