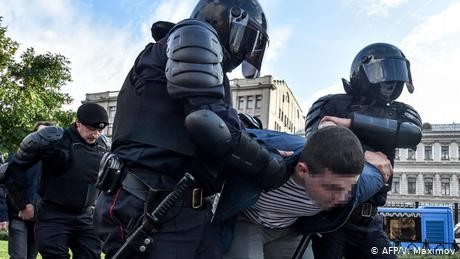 Russia's media regulator on Sunday asked Google to delete from its YouTube platform videos of anti-government protests and arrests which took place in Moscow a day earlier.

Roskomnadzor said it complained to Google about unspecified "structures" allegedly using tools, such as push notifications, to spread information about illegal mass protests, "including those aimed at disrupting elections."

The Russian watchdog said that if Google failed to respond to its request, it would consider it "interference in its sovereign affairs" and "hostile influence [over] and obstruction of democratic elections in Russia."

Moscow would then reserve the right to react "appropriately," it said, without elaborating.

Protests erupted after several opposition candidates were controversially rejected from a ballot for an upcoming Moscow council vote.

Tens of thousands of Russians protested in Moscow on Saturday in favor of free and fair elections and against police violence, in the fourth demonstration in as many weeks.

Police have detained over 1,300 protesters taking part in the protests.

Moscow has a track record of putting regulatory pressure on Google, one of the main rivals of Russian internet search company Yandex.