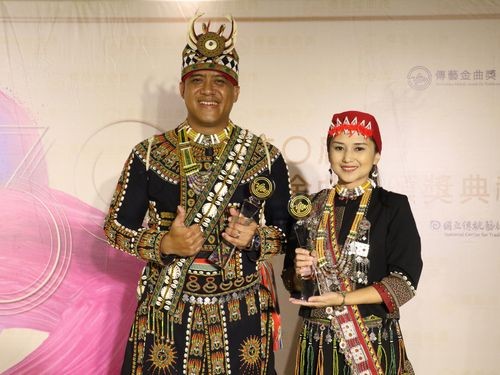 A group of indigenous Rukai elementary school students captured one of 19 Golden Melody Awards prizes awarded Saturday for traditional arts and music in Taiwan, recognition they hope will get more people interested in Taiwan's indigenous culture.

Traditional Arts and Music at a ceremony held at the Taiwan Traditional Theatre Center in Taipei on Saturday.

One of the top prizes Saturday, for Best Traditional Album, was awarded to the 12-track vocal album "nanga tathné (來唱歌ㄖㄚ)" of traditional indigenous music sung by Rukai children from Maolin Elementary School in Kaohsiung.

The jury praised the children's singing for its purity and innocence, and commended the album for showcasing Taiwan's indigenous culture.

"This album encourages the children to grow, and through their beautiful songs, they create a path for future ideas and works,"the jury said in a statement.

Maolin Elementary School director Omalizi Kumula (宋麒麟), who played a major role in helping the children learn and practice the songs recorded in the album, told CNA he hopes the album can give people more exposure to Taiwan's indigenous culture before it fades away.

"I hope the album can give people the chance to see the importance of preserving this culture and learn to appreciate its uniqueness," he said.

"Some linguists have tallied about 50 languages, including indigenous languages, currently spoken in Taiwan, but in 15 to 20 years, some think only Mandarin and English will be the only languages left."

The jury commended Fu's use of the double bass to break barriers by turning what many see as an instrument that accompanies others in musical arrangements to one that stands on its own as a solo instrument.

"Double bass is not a popular instrument, but I am lucky to be able to find the right energy to express Bach's music through it," Fu said through a representative from

"No matter how hard or how undesirable something is, as long as you keep at it you will see results."

Fu was not able to make the ceremony because he is currently in France.

The Best Crossover Music Album award was won by violinist Chang Ya-ching (張雅晴) for her instrumental album "The Hai-ang Paint -- Ya-Ching Chang Violin Solo (海翁繪-張雅晴小提琴獨奏專輯)," which the jury praised for its perfect balance of violin and piano.

The Best Religious Music Album award was won by Báng-kah Presbyterian Church (台灣基督長老教會艋舺教會) for "Just for You (只為了祢)," honored for its pure, religious and sacred feeling created by the fusion of small horns and the pipe organ.

The Best Actor award was won by Ku Yi-fan (古翊汎) for his performance in the theater production "Battle of the Right to Life (夢斷黑水溝)," while the Taipei Philharmonic Chamber Choir won the Best Singing Performance award for the album "Image Taiwan II (印象臺灣II)."

Sound engineer Yeh Chwei-ching (葉垂青) and playwright Wang An-chi (王安祈) each received a special award for their contributions and achievements in the fields of traditional and artistic audio publishing and theatrical performing arts, respectively.

A total of 1,078 works from 102 artists and groups, 71 in the publishing category and 31 in the theatrical performance category,were submitted to the awards, an increase of 184 from last year,according to the Ministry of Culture.