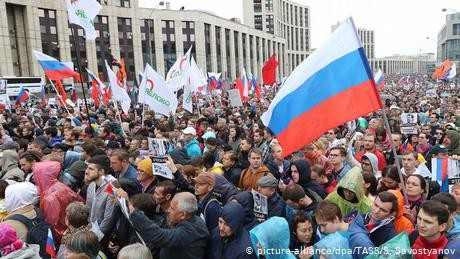 Thousands of people gathered in the Russian capital Moscow on Saturday to protest the exclusion of opposition and independent candidates from the city council vote.

It is the third consecutive weekend of demonstrations to protest the exclusion.

Among those barred from running are allies of top Russian President Vladimir Putin critic and opposition politician Alexei Navalny.

Unlike the previous protests, city authorities approved the Saturday gathering. In the first two demonstrations, thousands of people were detained, sometimes violently.

Read more: Moscow protests: 'It is our civic duty to go out on the streets'

Protesters carried placards with slogans such as "give us the right to vote!" and "you've lied to us enough," while others held up pictures of activists arrested at earlier protests.

Police on Saturday detained Lyubov Sobol, an unregistered candidate who has become a leading figure of the protests.

Most opposition candidates who have been banned from participating in the vote have been jailed for violating protest laws.

Although Saturday's rally was authorized and participants should not face detention, Navalny, who is currently in jail, called for supporters to walk peacefully through the city.

Popular electronic and rap musicians were set to play at the rally. One of Russia's most famous rappers, Oxxxymiron, appeared at the rally wearing a T-shirt with a photo of one of the jailed students, Yegor Zhukov.