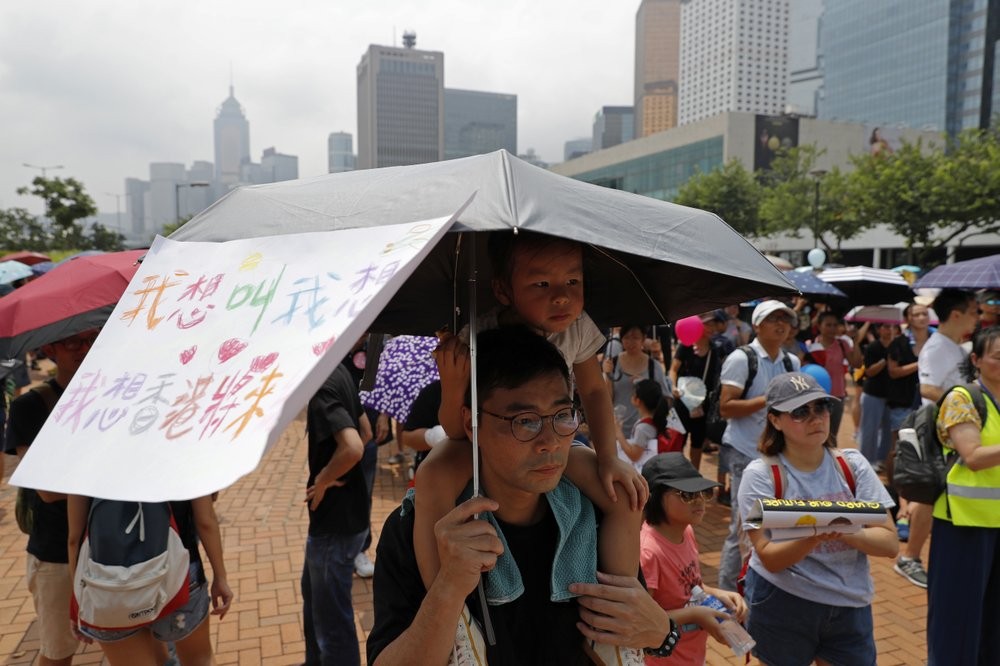 HONG KONG (AP) — Protesters marched in two Hong Kong neighborhoods Saturday in defiance of a ban by police who have clashed repeatedly with government critics.

Hong Kong is in its ninth week of demonstrations that began in response to a proposed extradition law but have expanded to include other grievances and demands for more democratic freedoms.

Protesters are calling for the resignation of the territory’s leader, Chief Executive Carrie Lam, and an investigation into complaints of abuses by police.

Police refused permission for two rallies Saturday but they went ahead despite that. Reporters saw officers in riot gear on a road where hundreds of people gathered for one of the rallies.

That followed a separate march earlier Saturday, which received police approval, by parents who called for greater protection for children following incidents in which ordinary people have been caught in clashes between police and protesters.

“It’s dangerous to bring my child to participate in any protest,” said Natalie Lee, who was with her 2-year-old daughter. “Today’s march provides a good opportunity for us to bring our children to voice our demands and I hope more peaceful protesters will come out too.”

Demonstrators complain China’s ruling Communist Party and Hong Kong leaders are eroding the liberties promised to the former British colony when it returned to China in 1997.

Opponents of the proposed extradition law said it would hurt the independence of Hong Kong courts and expose residents to political cases. The government suspended consideration of the proposed law.

Beijing has criticized some protesters as violent radicals spurred on by foreign forces bent on containing China’s development.

For their part, protesters say police have used excessive force and ignored calls for help when thugs attacked civilians in a commuter rail station.

Lam defended her government’s handling of the protests in a phone call with Britain’s foreign secretary, Dominic Raab.

The protests have strained Beijing’s relations with Britain, which has called on China to honor the terms of their handover agreement and the freedoms its promises.

In the call Friday, Lam told Raab that while her government “respects the diverse views held by members of the public on various issues as well as the freedoms of speech and assembly, it will not let violence and illegal behaviors disrupt public order,” said a statement issued by her office.

They chanted slogans, set up a TV sets to show video of recent protests and handed out leaflets explaining the controversy over the proposed extradition law and demands for universal voting rights.