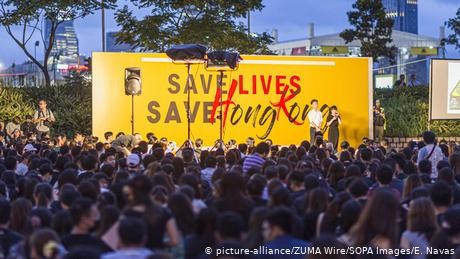 Washington has accused Beijing-backed news outlets in Hong Kong of publishing "dangerous" reports containing personal information about a US diplomat who was photographed meeting pro-democracy activists in the semi-autonomous city.

"Official Chinese media reports on our diplomat have gone from irresponsible to dangerous. This must stop," US State Department spokeswoman Morgan Ortagus wrote on Twitter.

A report by the pro-Beijing newspaper Ta Kung Pao about US diplomat Julie Eadeh contained personal information about Eadeh, her husband and their children.

Earlier this week, Eadeh was photographed meeting with democracy activists Joshua Wong and Nathan Law, both of whom were prominent figures in the 2014 Umbrella Movement protests and have spent time in prison because of their activities. Wong and Law had met with US officials a number of times previous to their meeting with Eadeh.

The US and China have become embroiled in an escalating row over recent pro-democracy protests in Hong Kong, which Beijing says are funded by the West. China has so far produced little evidence for the claim apart from pointing out some statements by Western politicians who are sympathetic to activists in the city fighting to retain a degree of independence from Beijing.

The Office of the Commissioner of the Ministry of Foreign Affairs of China in Hong Kong has called Ortagus' comments "blatant slander against China" and accused the US of employing "gangster logic."

Hong Kong has seen two months of sometimes violent protests that were initially held in opposition to a planned extradition law but have since morphed into a broader movement wanting democratic reforms and more self-determination.

The protests have continued on Saturday, with demonstrators occupying the arrivals hall at the international airport for a second day and marches in the inner city. All rallies have so far been peaceful and no flight cancelations have been reported.

More protests are planned for Sunday, including one in the district of Sham Shui Po, where there have been violent clashes between demonstrators and police in the past.