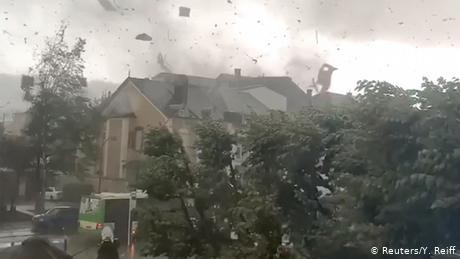 Officials said around 160 buildings were damaged by the twister that struck the towns of Petange and Kaerjeng near the French and Belgium border.

Images and videos on social media showed the tornado with winds packing 128 kilometers per hour (80 miles per hour) throwing debris, roofs and tree branches into the air.

A spokesman for the Luxembourg police reported a "swathe of desolation" spanning a distance up to six kilometers.

Prime Minister Xavier Bettel said that a crisis unit had been established and the government was helping those impacted by the destruction.

Read more: Insuring against the inevitable risk of climate change

The tornado also caused damage but no injuries in France's Meurthe-et-Moselle region.

The German states of Saarland, Rhineland-Palatinate and Baden-Württemberg were also hit by heavy storms on Friday that caused partial flooding.

In Amsterdam, residents and tourists were caught offguard by another whirlwind. It was unclear if the windspeeds were high enough to classify it as a tornado. No injuries and some damage to buildings were reported.

Tornadoes are less common in Europe than in the United States, where "Tornado Alley" in the Midwest sees many each year. The last known fatalities resulting from a tornado in Europe were in November 2016 near Rome, Italy.