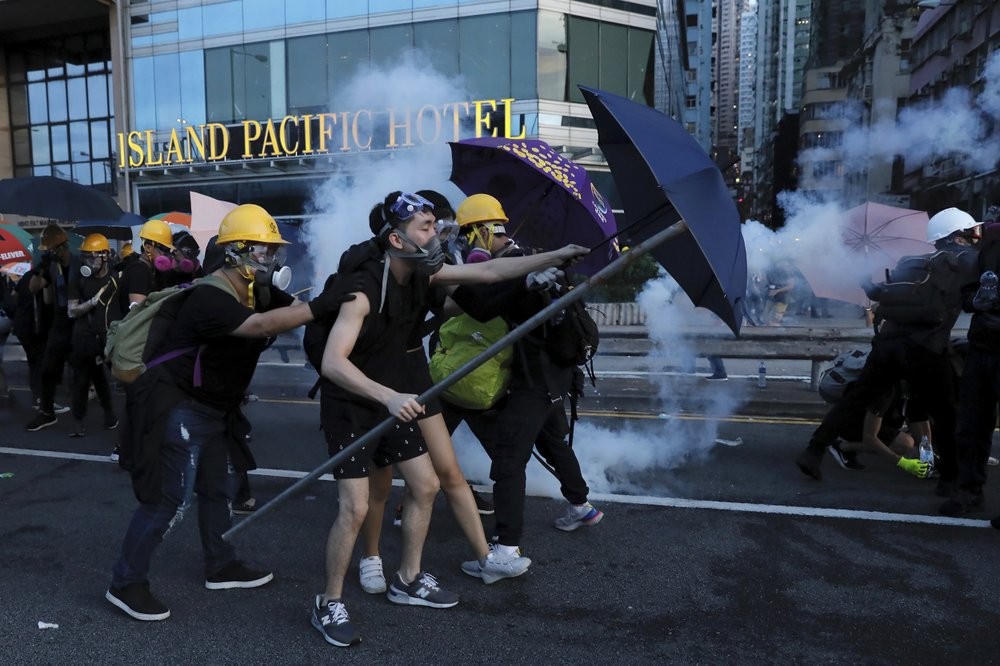 That’s partly out of concern that protesters’ demands for expanded democracy could inspire like-minded officials and intellectuals on the mainland.

Yet, Beijing shows no signs of preparing for a major crackdown, content instead to ignore the protests in the hopes that frustration will lead to further violence that will eventually turn the territory’s silent majority against the movement, according to experts.

“Hong Kong poses a serious problem for the Chinese government. It can’t allow the protesters to challenge its authority or deface symbols of its authority unpunished but it also does not want to attempt a military crackdown,” said Steve Tsang, director of the China Institute at London’s School of Oriental and African Studies.

Under those circumstances, Beijing would prefer to “isolate and undermine the protesters so the movement in Hong Kong fizzles out,” Tsang said.

The protests also come at a sensitive time for President Xi Jinping, who after removing presidential term limits last year effectively made himself leader for life. That has intensified criticism over his concentration of power, even as his propaganda machine relentlessly promotes his image and achievements ahead of the 70th anniversary of the founding of the People’s Republic on Oct. 1.

Meanwhile, China is grappling with a slowing economy and the ongoing impacts of the U.S.-China trade war, as well as pushback against its ambitious multi-billion dollar “Belt and Road” infrastructure program that is seen as miring poorer nations in debt.

China’s international image has suffered as well from its mass incarceration of members of its Uighur Muslim minority and aggressive moves in the foreign policy sphere, including what professor Anne-Marie Brady of New Zealand’s University of Canterbury described in a recent article as “uncharacteristically undiplomatic activity” by Chinese diplomats in Canada, Sweden, Britain, Australia and New Zealand.

China’s activities have included encouraging mainland Chinese students overseas in their attacks on supporters of the Hong Kong protests and Chinese human rights more generally, sparking calls from politicians in those countries for foreign policy adjustments to reduce Beijing’s influence.

Despite massive Chinese censorship, details of the events in Hong Kong have spread through southern China and among officials and intellectuals in major cities, raising concerns about potential calls for political freedoms like those enjoyed by Hong Kong.

“Beijing fears there might be a copy-cat effect in other cities in China,” said Willy Lam, a longtime observer of Chinese politics at the Chinese University of Hong Kong.

Attacks on police stations and symbols of Chinese authority and displaying disregard for the law are seen as “potentially very dangerous” because they challenge the legitimacy of Beijing’s rule in Hong Kong under the “one country, two systems,” Lam said. At the same time, many Hong Kongers believe China has broken its promise to allow Hong Kong a high-degree of self-rule, driving protesters to rebel, Lam said. Beijing, he said, is seen as no longer having a “valid legitimacy to rule Hong Kong.”

The refusal to offer concessions or even open a dialogue with the protesters creates a “vicious circle” whereby those in the movement have no choice other than to continue demonstrating or tow Beijing’s line, said Joseph Cheng a political analyst now retired from the City University of Hong Kong.

“There’s no prospect for reconciliation. It’s now a contest of wills,” Cheng said.

And while Beijing condemns the violence, violence is “precisely what it is hoping for” in the expectation that frustrated protesters will provide more images of melees and fire bombings that will alienate the general population, Lam said.

However, one tactic Beijing is highly unlikely to use is deploying its military, as was used with deadly effect against pro-democracy protesters in Beijing’s Tiananmen Square in 1989, the last time the party saw such open defiance of its authority on the streets of a Chinese city.

Deploying the People’s Liberation Army would be an “irrevocable and fateful decision, which would have devastating consequences for Beijing,” Lam said. “China would lose face internationally because, after 20 years of Chinese rule, not only has Beijing failed miserably to win hearts and minds, but it now has to use brute force to enforce its will.”

Such a move would have an equally devastating effect on Hong Kong’s economy, possibly causing the local stock market that is key to funding the Chinese economy to crash and prompting a mass outflow of foreign investors and capital.

Based on Beijing’s fiery rhetoric, the numbers of arrests already made and the range of charges being brought — including rioting, which carries a potential 10-year prison sentence — Lam said the authorities are likely to come down much harder than after 2014 demonstrations.

“They hope to use those charges to serve as a warning, but so far the protesters have not been cowed,” Lam said.

Lam and others also expect Beijing to double down on what it terms patriotic education in an attempt to inculcate love and respect for the Chinese state. That will include more lessons on patriotism in the school curriculum, more spending on free tours of key sites in mainland China glorifying the party and economic inducements such as the offer of high-paying jobs in the Pearl River Delta surrounding Hong Kong.

“Ultimately, they hope people will just keep their heads down and focus on making money,” Cheng said. “But these issues are not resolved and there is a strong chance (a protest movement) will rise again.”