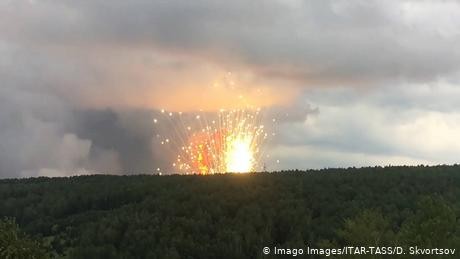 Two new explosions ripped through an ammunition depot at a Russian military facility in eastern Siberia on Friday, injuring eight people, according to state-run news agency TASS. A fire also broke out at the storage depot, located near the city of Achinsk.

TASS reported that the Russian Defense Ministry said lightning was the cause of the explosion and that the nearby village of Kamenka was being evacuated.

The incident comes four days after deadly explosions and a subsequent fire swept through the same ammo facility, forcing thousands of nearby residents to evacuate.

One person was killed and 13 others injured during Monday’s explosions, according to local reports. Russia’s Defense Ministry on Tuesday said "human error" was a possible cause for the explosions.