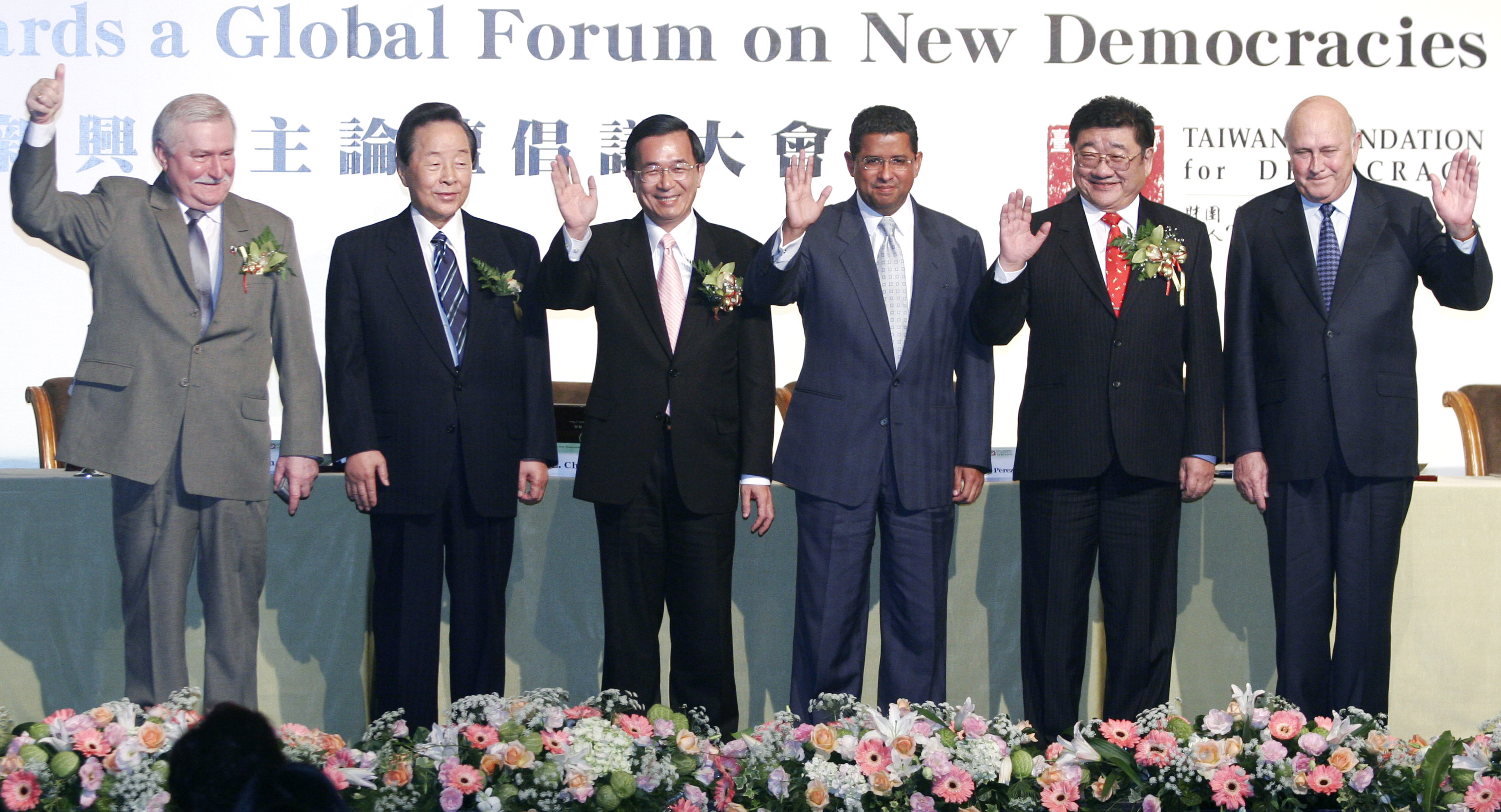 Five former heads of state joined President Chen Shui-bian (陳水扁) yesterday in Taipei to establish a new international platform to share experience among new "third wave" democracies and step up efforts to promote democratic transitions globally.
In a brief ceremony held at the Grand Hyatt Taipei, a "Joint Declaration for the Global Forum on New Democracies" was signed by President Chen, former El Salvadoran President Francisco Flores, former South Korean President Kim Young-Sam, former Mongolian President Punsalmaa Orchirbat, former Polish President Lech Walesa and former South African President Frederik Willem de Klerk.
The signing of the declaration followed a full-day dialogue sponsored by the Taiwan Democratic Foundation in which the six leaders, all of whom played key roles in the democratic transitions in their countries, expressed their views on ways to work together to promote democracy and on their experiences in transitional justice, choosing a constitutional system, coping with national and ethnic identities, and mass media and democratic development.
The declaration said the participants had met to review the "third wave" of democratization - which began with Portugal's "Carnation Revolution" in April 1974 and spread to over 30 countries before the end of the 20th century - and the development of new democracies and their challenges.
Besides acknowledging the diversity of new democratic transitions, the participants stated that "the pursuit of democracy, freedom and human rights is universal" and maintained that "the quality of democracy needs to be improved and good governance must be established to achieve the consolidation and deepening of democracy."
The six current and former leaders also stressed the need for "a platform for sharing experiences" among leaders of new democracies" to help cope with challenges in their own transitions and "overcoming" barriers to the expansion of democratization through "dialogue, exchanges and mutual learning."
The six incumbent and former leaders "announced their decision to commonly initiate the establishment of a 'Global Forum on New Democracies" as a platform for the sharing of actual experiences of new democracies and to study the factors needed for success in democratization, with the aim of promoting both democratic consolidation and deepening, and to consider how to assist in the democratic transformation of countries that are still under undemocratic systems.
The declaration announced that the first "Global Forum on New Democracies" will take place next year in Taipei.
Revolutionary backing
President Chen opened the forum by noting that the concept of the meeting originated in "the feeling that there is a lack of a platform for leaders of new democracies to share their experiences of leading their countries and people to complete democratic transitions.
Chen observed that despite different solutions to the problems discussed, all six new democracies faced a common global environment and similar challenges. He urged the next session to more deeply look into "issues in international cooperation, social welfare and ecology."
"This is a historical moment as we have created our own platform for new democracies," said Chen, who noted that the hard-won experience of the six leaders present "is our most precious asset for new democracies."
Besides expressing his hope that the formation of the new forum "will spur the development of democracies the world over," the president also expressed the hope that Taiwan's visibility in global democratization would be enhanced through the long term operations of the new global forum.
Former South Korean President Kim Young-Sam said that to overcome the "twists and turns" in democratic development, democratic leaders "must abide by clear principles" including a commitment to freedom and democracy, constitutional government, a free market economy and media freedom.
"All members of this forum should take these principles to heart and join international efforts for the expansion of democracy," he said.
Former Mongolian President Punsalmaa Orchirbat expressed appreciation for the sharing of "valuable experiences" and said the formation of the new global forum "is entirely in accord with the series of international conferences on new and restored democracies."
Besides stressing the need for a balance in the participation of government, parliament, civil society and non-government organizations, the former Mongolian head of state stressed that "it is difficult to talk of democracy when people lack basic necessities of life."
"The formation of the Global Forum on New Democracies will be an important step to strengthen the values of democracy in Asia and show the importance of democracy in all regions," Orchirbat said.
"The democratic achievements in Taiwan are beneficial to strengthen democracy in Asia," he noted.
Former South Africa President Frederick de Klerk said that "our presence in Taipei indicates that we support the Global Forum on New Democracies" and cautioned that "the first decades of a new democracy are often the most vulnerable, so it makes sense to exchange views on how best to consolidate new democracies."
"The greatest challenge in the world today is how to accommodate and manage diversity," de Klerk said.
Former El Salvador President Francisco Flores said that nations struggling for democracy "need the full support of countries which already have political liberties and this forum can be a vehicle to provide such support in an orderly and effective way."
"El Salvador is an example that in the face of the greatest obstacles of war, we can find peace, build democracy, live in freedom, promote economic development and rise out of poverty," stated Flores.
Former Polish President and ex-Solidarity trade union leader Lech Walesa, who spiced up the forum with numerous stories and colorful examples of the Polish fight to restore democracy against a the former Communist regime, said that the new forum would "have much to discuss given the need for democracy to take different shapes in the global world.
"I, Lech Walesa, a revolutionary, am committed to the forum and will participate actively in it," the former Polish leader declared.