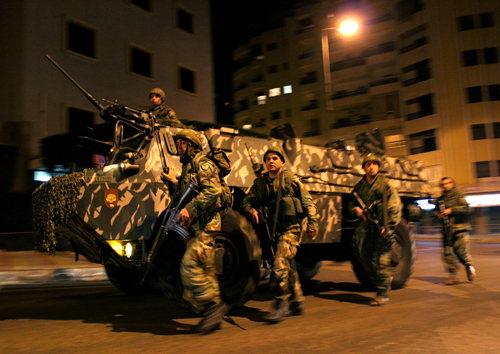 Lebanon's army lifted a curfew on Beirut yesterday, but schools and universities were closed a day after Sunni-Shiite clashes raised fears of the kind of wider sectarian strife that once plunged the country into civil war.
Traffic began to return to the streets of mainly Sunni districts of Beirut after the army lifted the curfew at 6 a.m. (local time), but some feared there would be more clashes.
It was the first night curfew on Beirut since the 1975-90 civil war.
"It's very bad. It's going to be like Iraq here," muttered a vegetable seller in a religiously mixed area of the capital.
"God damn whoever awakened it!" read the headline in As-Safir newspaper.
Four people were shot dead in clashes between pro- and anti-government activists on Thursday and about 200 were hurt in the violence that flared after a scuffle between students at a Beirut university.
Some pedestrians were beaten up on the basis of their sectarian identity, witnesses said.
The four dead included two Shiite Hezbollah students and one supporter of the Sunni-led government.
The U.S. ambassador to Beirut, whose country backs Lebanese Prime Minister Fouad Siniora against Hezbollah and its Shiite and Christian allies, said the situation had become "quite dangerous" and Syria was involved once again.
Hezbollah chief Sayyed Hassan Nasrallah issued a religious edict, or fatwa, calling his supporters off the streets. Sunni leader Saad al-Hariri urged his loyalists to show restraint.
"I call on everyone to return to the voice of reason," said Siniora, speaking from Paris. He was at the aid conference seeking help to shore up Lebanon's debt-laden finances and repair damage from last year's war between Israel and Hezbollah.
U.S. ambassador Jeffrey Feltman pointed the finger at Syria, which is Hezbollah's main ally, along with Iran.
The opposition launched nationwide protests on Tuesday which shut down much of Lebanon and sparked violence in which three people were killed and 176 wounded.
The general strike intensified a street campaign that began on December 1 when opposition supporters began camping out near Siniora's offices in downtown Beirut to back demands for veto power in government and early parliamentary elections.
Casting a shadow
Violence in Lebanon between pro- and anti-government activists in Lebanon on Thursday overshadowed a US$7.6 billion aid deal by international donors to shore up the U.S.-backed government.
Fighting started between students with sticks and stones on the university campus then spilled into nearby streets. It developed into exchanges of gunfire from assault rifles and pistols involving students and residents from both sides.
It was not clear who fired first but television stations run by the opposition blamed the deaths on pro-government gunmen.
Soldiers fired into the air to try to disperse the crowds and were later deployed in large numbers in an effort to control the clashes. Thick smoke rose from the area, where rioters had set cars and tires ablaze.
Government loyalists hurled petrol bombs at an office of a pro-Syrian party in a Sunni neighborhood of the capital setting the building on fire, witnesses said.