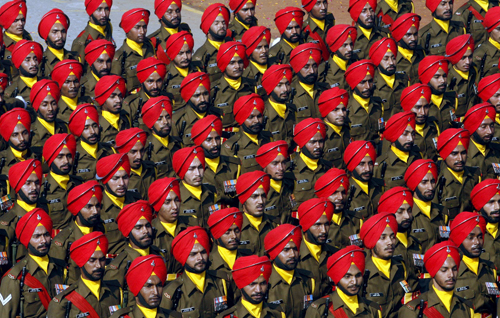 Thousands of security personnel were deployed throughout India to prevent any militant attacks during national day celebrations yesterday as millions of people, including Russia's president, watched a military parade in the capital.
Russian President Vladimir Putin, who arrived Thursday for a two-day visit, was a special guest at the parade in central New Delhi, the highlight of the annual Republic Day festivities.
Flanked by India's President A.P.J. Abdul Kalam and Prime Minister Manmohan Singh, Putin viewed the parade that included T-72 tanks, multi-barreled rocket launchers and the supersonic Brahmos missile - all purchases from Russia.
Scattered violence was reported as other parades were held in many Indian states, including Jammu-Kashmir and Assam, where separatist militants don't accept Indian rule and called for general strikes.
Government forces shot and killed a key Islamic militant leader in a pre-dawn gunbattle in the Indian portion of Kashmir yesterday, police said.
Mohammad Shafi Bazi, a commander of the Hezb-ul-Mujahedeen, opened fire when challenged by the army outside Srinagar, the summer capital of India's Jammu-Kashmir state, said Hemant Lohia, a local police official. There was no independent confirmation of the incident.
Also yesterday, suspected Maoist rebels triggered a land mine on a highway in eastern Orissa state, killing a paramilitary soldier and wounding two, the Press Trust of India news agency reported.
Paramilitary soldiers were ambushed while on their way to southern Orissa to remove trees felled on the highway by insurgents opposing national day celebrations, PTI said.
Republic Day marks the adoption of India's democratic Constitution on January 26, 1950. The country gained freedom from Britain in 1947 after two centuries of colonial rule.
Schoolchildren, folk dancers, and police and military battalions marched through New Delhi, followed by the military hardware display and a fighter jet flyby.
At least 15,000 police and security forces were deployed across the city, said Dipendra Pathak, a top police official. Much of downtown New Delhi was sealed off and snipers were deployed at key positions.
Barricades blocked roads leading to the parade route and vehicles were being checked.
Security was also tightened at major telecommunications and power installations, Pathak said.
Although there were no specific threats, a spate of deadly bombings in 2006 - including an attack in the city of Varanasi and railway bombs in Mumbai - warranted the extra security, Pathak said.
In the Indian-controlled portion of Kashmir, authorities closed roads leading to a Srinagar soccer stadium where a parade was held, said Farooq Ahmed, a top police official.
"There are intelligence inputs that militants will try to disrupt the Republic Day functions in Kashmir," Ahmed said.
Hezb-ul-Mujahedeen, the largest Kashmiri rebel group, and the All Parties Hurriyat Conference, an umbrella group of separatist political and religious groups, called for a general strike.
Hezb-ul-Mujahedeen is one of more than a dozen Islamic militant groups that have been fighting since 1989 seeking Muslim-majority Kashmir's independence from predominantly Hindu India, or its merger with mostly Islamic Pakistan.