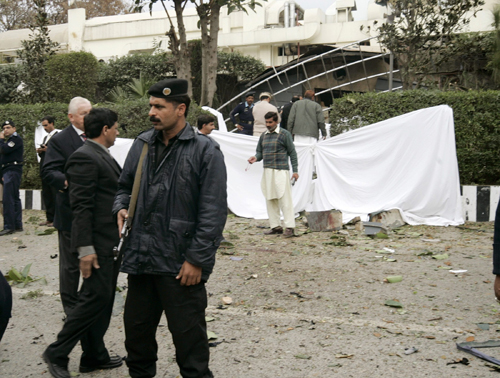 A suicide bomber killed a security guard and himself when he set off explosives strapped to his body outside the Marriott Hotel in the Pakistani capital Islamabad yesterday, the interior minister said.
The powerful blast, which could be heard across the city, occurred when the guard prevented the attacker from entering the heavily-protected five-star hotel, Interior Minister Aftab Sherpao told Agence France-Presse.
"It was a suicide attack. The suicide attacker and a guard were killed," Sherpao said. "The attacker tried to enter the hotel and was stopped by the security guard and there was a scuffle and the blast occurred."
Sherpao added: "The attacker's body was totally mutilated. There is hardly any body left. His limbs were scattered around the area."
Police officers cordoned off the site and placed a white cloth over the attacker's body after the blast, which happened in a high-security zone of Islamabad near government offices.
The bomber's head was lying at the scene and his mangled, scorched body was thrown over a crash barrier outside the hotel's nightclub and laundry room, opposite the guest car park, AFP correspondents said.
Panicked guests poured out of the hotel after the explosion before being escorted to other areas.
"I was taking lunch at the Royal Elephant Thai restaurant inside the Marriott when the entire restaurant was shaken by a bang," hotel guest Mohammed Aamir told AFP.
"It literally shook us out of our seats. It was a huge bang. We rushed outside and there was chaos."
A senior security official also confirmed it was a suicide bombing.
"It is a suicide attack, the man approached the entrance and he was apparently stopped by the guard when the explosion occurred. The guard was also killed," the official told AFP on condition of anonymity.
Four injured people were treated at the city's Poly Clinic hospital, a doctor said.
"We have received four casualties," doctor Murtaza Nadeem said. "One is serious and three others have minor injuries," he added.
The outer wall of the hotel opposite the guest parking lot was blackened while several cars were also damaged with their windscreens and rear windows broken.
The Marriott's management was not immediately available for comment.
An unexplained explosion outside the hotel's lobby in October 2004 injured a U.S. diplomat.
Security is extremely heavy at the Marriott with all vehicles and guests subjected to rigorous checks.
The hotel was due to host a function later in the day marking the 58th Republic Day of Pakistan's regional rival India.