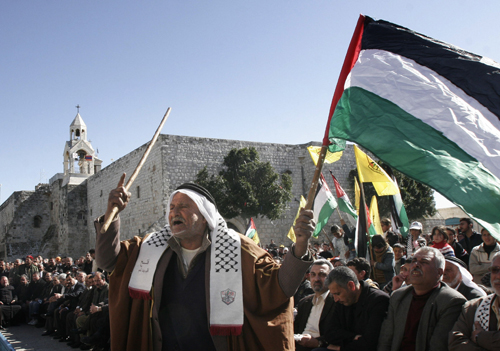 In the year since Islamic Hamas militants swept parliament elections, the Palestinian Authority has been ostracized by governments around in the world, the Palestinians have sunken deeper into poverty and hundreds in the West Bank and Gaza have died in clashes with Israel and each other.
Yet the Hamas government is in no immediate danger of being ousted by a popular rebellion. The militant movement remans popular and its chief rival, moderate Palestinian President Mahmoud Abbas, is reluctant to force a showdown, either by disbanding the government or setting a date for early elections.
Battered but not broken, Hamas marked the anniversary of its January 25, 2006 election victory, with rallies across the West Bank and Gaza Strip yesterday. Palestinian Prime Minister Ismail Haniyeh of Hamas was due to address the main rally in Hamas' Gaza City stronghold in mid-afternoon, after the main Friday prayer.
In a speech Thursday, a defiant Haniyeh said his government did not surrender to international pressure.
Ghassan Khatib, a Palestinian analyst and former Cabinet minister, said Hamas' popularity is not linked to the performance of its government. Israel's occupation of the West Bank and the expansion of Jewish settlements will "contribute to the radicalization of the Palestinian society and will continue to allow Hamas to enjoy the confidence of the Palestinian people," Khatib said.
Hamas' election victory came in its first race for the Palestinian parliament. It won 74 of the legislature's 132 seats and ousted Abbas' Fatah Party, which had ruled exclusively since the Palestinian Authority was formed in 1996.
Israel and the West promptly cut off hundreds of millions of dollars in funding to the Palestinian government, in a bid to coerce the militant group into disarming and recognizing Israel's right to exist.
Hamas has refused to bend, helped by contributions from some Arab and Muslim states.
Election threats
Abbas, who wants to restart peace talks with Israel, has been trying for months to form a more moderate Fatah-Hamas coalition government, hoping that would persuade the West to lift its sanctions.
But although the boycott has deepened the Palestinians' destitution, the two sides haven't been able to reach agreement. Tensions between them have exploded into clashes in Gaza, killing nearly three dozen people in the latest round of violence.
The infighting aggravated the hardship caused to ordinary Palestinians by Israel's recently ended campaign against Hamas and allies who captured an Israeli soldier and fired rockets almost daily at southern Israel.
A frustrated Abbas has threatened several times to call early elections, but has stopped short of setting a date. Even if a vote was held in coming months, Hamas might not necessarily be ousted. The Palestinian public is not eager to reinstate Fatah, having voted it out of power last year because of the corruption and patronage that attended its 40-year domination of Palestinian politics. Also, many Palestinians blame their problems on the Western and Israeli funding dryup, and don't hold Hamas responsible for their economic woes.
"The Palestinians have restored their dignity over the past year," said Shadwa Olwan, a 29-year-old secretary in Gaza and Hamas sympathizer. "This government has put an end to 'money in return for compromise.'"
Morad Taha, a 23-year-old unemployed laborer from a village near the West Bank town of Ramallah, said he voted for Fatah last year but wouldn't vote for either if new elections were called.
"Neither Fatah nor Hamas did anything to help the Palestinian people," Taha said. "They are just fighting for power, and don't care for their people."
Khatib said only a successful peace process would influence Palestinian public opinion against Hamas, which claimed its armed resistance was the reason Israel evacuated the Gaza Strip unilaterally in late 2005.
Hamas' power, he said, would be undercut by "a renewal of a political process of the kind that can bring back the hope to the Palestinian public of the possible peaceful end of the occupation."
On Thursday, Haniyeh commemorated Hamas' election victory by attacking the Western sanctions, which he declared to be ineffective because they "did not make the government surrender."
"The government did not collapse in the face of this universal pressure," he said. "We remained loyal to the resistance because we are a government born of resistance."
But privately, a Hamas lawmaker said the group could not continue to withstand the economic pressure for the remainder of its four-year term.
"Either we concede politically and accept Abbas' program, or find a solution by leaving the government or form a government of independent experts, he said, speaking on condition of anonymity because his views did not reflect the group's official policy. "We can't handle the financial pressure for three more years."