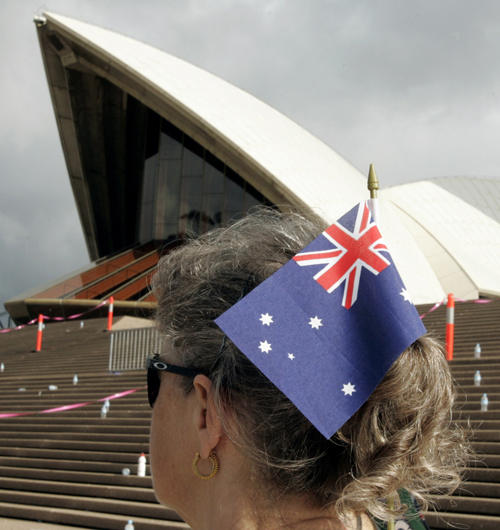 While many countries opt for national day parades of pomp and power, Australians prefer a barbecued sausage and a beer - and don't forget the fireworks.
But as millions flocked to beaches, backyards, parks and harbor fronts yesterday for the annual drinking and eating fest known as Australia Day, a new wave of patriotic flag-fervor was sweeping the country 219 years after British settlement.
With around a quarter of the 20 million population born overseas, Australians are rarely hand-on-heart about their nation's history or their blue flag with its sprinkling of southern stars and Britain's banner, a colonial legacy.
But after a furor this week over the barring of the flag at the country's biggest rock concert due to concerns about race clashes, the at-times unloved banner is back, bigger than ever.
This year it has been fashioned into bandannas, bikinis, boob-tubes and singlets, adorning sunburned holiday faces and plastered onto flip-flops, worn by young and old alike.
At crocodile and kangaroo barbecues in the tropics, cockroach races in Brisbane, beer-keg lifting competitions and fish-tossing contests, the banner was ever-present.
Even the new Australian of the Year, environment scientist and climate change warrior Tim Flannery, felt compelled to don a flag-adorned hat after his award.
Flag for all
"Flying the flag of music, freedom," one major Sydney newspaper headline said, as other papers cheered troops overseas in Iraq and closer-to-home bushfire fighters as national heroes. The turnaround, and a backdown by concert organizers who had feared the flag's use as "gang colors" by racists, transformed Australia Day into a field of red, white and blue from backyard cricket games to ferry races on Sydney's sweeping harbor.
Australians more than ever before are wrestling with what it means to be Australian, with the conservative government calling for new migrants to adopt vague national values like "mateship."
"Australia Day provides us with an opportunity to reflect on our common values and our responsibilities," Prime Minister John Howard said in his Australia Day message to the nation.
Howard, perhaps the flag's biggest fan, has also clashed with Australia's small Muslim community, calling for its more extreme members to be muzzled.
His message seemed to have been heard at Sydney's largest mosque where a public barbecue was held as a symbol of national solidarity, despite its cleric who publicly criticized non-Muslim Australians and compared unveiled women to uncovered meat.
Warren Pearson, the director of the National Australia Day Council, said national pride was on the rise Down Under.
"Australia Day is growing in importance and we've seen a real groundswell in participation since about 2000," he said.
Far from being the banner of racism that has been creeping into suburbs since 2005 race-based riots on Sydney's beaches, Pearson said nobody should feel ashamed to wear the flag.
"People are doing it naturally (and) young people turning up dripping in the flag is great to see," he said.